My Expertise Will Help Kotoko To Perform - Johnson Smith 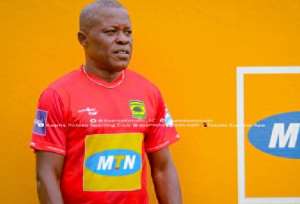 Newly appointed deputy coach of Asante Kotoko, Johnson Smith, says he will use his experise to assist the technical team to make exploits in the CAF Confederation Cup.

Smith returned to Kotoko for a third stint as he penned a two-year deal with the Porcupines Warriors last Friday to replace Ralph Akakpo Patron.

Kotoko, who were eliminated from the CAF Champions League, now play Ivorian side San Pedro FC in a two-leg playoff for the Confederation Cup.

According to the former Karela United gaffer, he still had a lot to offer the club. Kotoko host the first leg in Kumasi on October 27 and travel to the Ivorian city of San Pedro for the return fixture on November 3.

"I have been in coaching for some time now and have gathered a lot of experience on the touchline. I am bringing all my expertise in coaching to help Asante Kotoko to succeed again as they play in Africa and to enable the club return to its glory days," he noted.

Coach Smith returns to Kotoko's technical bench a decade after his departure from the Porcupine Warriors. He served in the same capacity under Coach Bashir Hayford in the 2007/2008 season where the team played in the CAF Confederation Cup and reached the group stages.

Without mentioning names, the former Karela FC tactician indicated he had observed some of the current players of Kotoko, whose positions needed to be changed in order to bring the best out of them.

"I know some of the players, I even watched them play a friendly game last Friday, I will discuss with the senior coach why certain players should have their position changed on the field, to bring the best out of them, I am a type of coach who doesn't put pressure on managers to buy players, I prefer to build players rather."

Coach Smith reminded football lovers of his coaching prowess when he led Karela United, an averagely young team to play in the final of the GFA Normalisation Committee Tier 1 Special Competition, only to be beaten by Kotoko in a penalty shootout.

He pleaded with the club’s supporters to be patient as the technical team worked to build a winsome side for domestic and continental campaigns.

"Fans of Kotoko should just have a little patience with the team, I am coming to help build a formidable side which is capable of competing against any team, so we should all hope for a better future for the club," he remarked.

Johnson Smith will serve as deputy to the club’s Norwegian coach, Kjetil Zacharriasen.