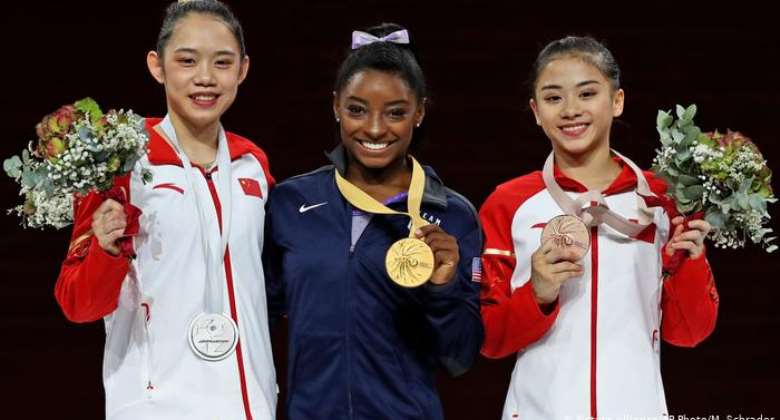 The female athlete has become the most decorated gymnast in World Championships history with her 24th and 25th gold medal on the floor and vault beam. Hailing from Ohio, the record medalist is only 22 years old.

Simone Biles became the world's unrivalled No. 1 gymnast after giving two spectacular performances at the World Gymnastics Championships in Stuttgart on Sunday.

Sunday's grand performance on the beam celebrated her as the first woman in almost 70 years to earn six US senior women's all-around gymnastics titles. On top of that, she also becomes the first woman to attempt and land a triple-twisting, double back manoeuvre during her floor routine.

Biles delivered a routine on the beam before a full-twisting double tuck dismount, scoring 15.066

Only two hours after her polished beam routine, Biles won yet another gold medal in the women's floor final, extending her own all-time record to 25 world medals.

Read more: Olympic champ Simone Biles: I too was abused by team doctor

After her breathtaking performances, Biles responded modestly to reporters that her routine "wasn't as good as in some of the trainings." On winning her gold medal, she said: "each (title) gets better and better ... it just keeps getting more exciting."

Originally from the Midwestern state of Ohio, Biles picked up her fifth gold medal of the week in Stuttgart. Sunday's arena was packed with spectators.