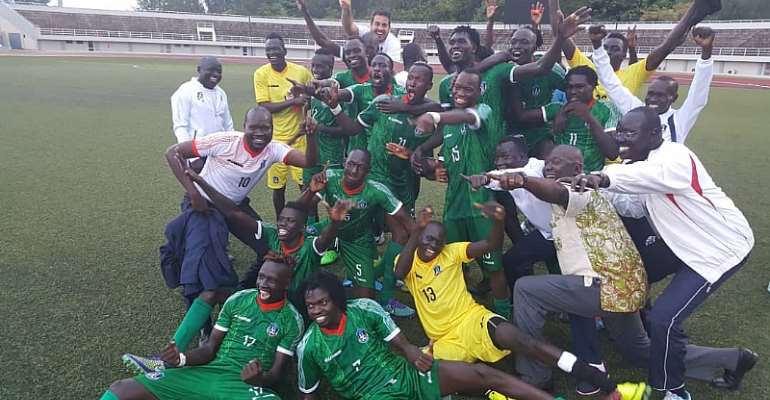 South Sudan have qualified for the 2021 Africa Cup of Nations qualifiers group stage after they won the first leg of their tie against Seychelles 2-1, the Bright Stars followed it up with a 1-0 victory away from home to go through 3-1 on aggregate.

It was a victory that brought joy to thousands of fans in South Sudan who jubilated on the streets as the Bright Stars joined Group B of the qualifiers majestically.

Speaking after the win, the South Sudan Football Association (SSFA) President Michael Amin said, “We are indeed delighted by the hard work and dedication from the team. We are slowly joining the table of men in African football and we intend to be even more competitive.

South Sudan will play in Group B of qualifying with Burkina Faso, Uganda and Malawi.

Sao Tome Principe also followed up their 3-1 famous 3-1 first-leg win over Mauritius with a 2-1 victory in their home leg on Sunday to go through 5-2 overall.

Sao Tome will be in Group C of qualifying for the 2021 Nations Cup alongside Ghana, South Africa and Sudan.

Gambia and Chad both needed penalties to reach the group phase of qualifying for the 2021 Africa Cup of Nations as South Sudan and Sao Tome e Principe secured their places with aggregate victories.

The Gambia hosted Djibouti at the Independence Stadium in Bakau, just outside the capital, with the preliminary round tie level at 1-1 from the first leg.

The second leg also finished 1-1 leaving the tie at 2-2 overall.

It went to a penalty shoot-out with the home fans willing on their team as The Gambia won 3-2 on spot-kicks to progress to Group D of qualifying where they will meet the Democratic Republic of Congo, Gabon and Angola.

Chad also went through via penalties after they won the home leg of their tie against Liberia 1-0 to make it 1-1 on aggregate.

Liberia’s captain Sam Johnson was sent off shortly after the break for a second booking with Chad then capitalising to score the only goal of the second leg.

In the subsequent shoot-out, Chad just edged Liberia 5-4 to make it through to Group A of qualifying where they will face Mali, Guinea and Namibia.

The first two rounds of group matches will be played during the international window in November.