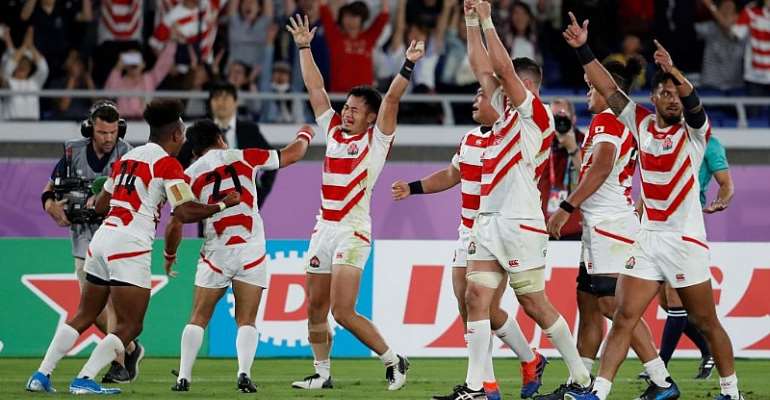 Japan went in to top gear to beat Scotland 28-21 on Sunday, in a clash worthy of Rugby World Cup history. They will face two-time world champions South Africa in the quarter-finals in Tokyo next weekend, after making it a perfect four wins out of four.

After a war of words between the rival coaches in the build-up, the teams observed a moment's silence for the victims of the violent typhoon Hagibis that swept through Japan on Saturday, killing at least 26 and forcing organisers to scrap three pool games.

Cheered on by a crowd of 67,000 in Yokohama, star wingers Kotaro Matsushima and Kenki Fukuoka did the damage for Japan, who survived a late fightback in Yokohama to advance as Pool A winners along with Ireland.

Scotland needed to win while preventing Japan from securing a defensive bonus point and they got off to a flying start.

Early pressure told as fly-half Finn Russell broke through to give them the lead after just seven minutes.

Japan coach hails good preparation
But the Japanese hit back with Matsushima latching onto a superb, one-handed offload from Fukuoka to score his fifth try of the tournament.

"For my team, the whole World Cup, we've prepared really, really well. They've put their bodies on the line every weekend," said Japan coach Jamie Joseph, who has compared his wide players to Ferraris.

"But tonight they went another level I felt. They gave everything they possibly could everyone gave 150 percent and that's what it takes to win big Test matches."

Japan's current vintage thrashed Russia 30-10 and Samoa 38-19 either side of their massive 19-12 win over Ireland, and Joseph will relish the chance to have another crack at the Springboks next weekend.

Disappointment for Scotland
Scotland, however, face an early flight home after missing out to Six Nations rivals Ireland for the pool's runners-up spot.

"We're disappointed, we obviously look at the game from how we play and we weren't able to win by more than eight points," said Scotland coach Gregor Townsend.

"We gave it a good crack in the second half but when you leak 28 points, you're always going to be chasing the game," he said.

"You've got to give Japan credit. They've really improved since four years ago."

Typhoon Hagibis washes out three matches
Namibia's meeting with Canada in Kamaishi was cancelled due to the dangers posed by Typhoon Hagibis.

Tournament director Alan Gilpin said floods and landslides had given him "no option" but to scrap the match in a town devastated by the 2011 earthquake and tsunami.

Images posted on social media showed the Canadian players helping out with the clean-up operation.