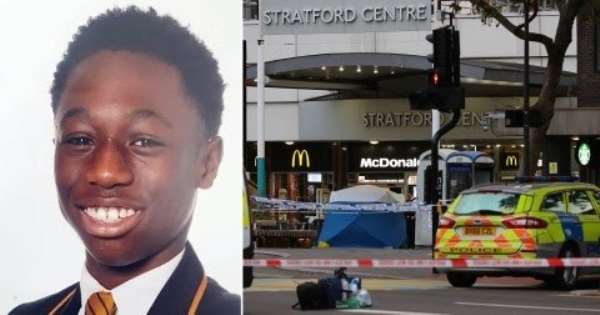 An aspiring teenage Ghanaian footballer, Baptista Adjei has been stabbed to death in London, United Kingdom.

The young ‘popular’ boy, 15 was fatally knifed in his school uniform outside McDonald’s, in Stratford Broadway, at 3.20pm on Thursday.

Paramedics desperately tried to keep the teenager alive, who witnesses saw collapsed in a pool of blood, but he was pronounced dead at the scene just half an hour later.

Police believe Baptista, who was described by family as a ‘nice boy’, was either attacked while on the bus or shortly after he got off.

His 15-year-old school friend was also rushed to hospital with stab wounds, where he remains with non-life-threatening injuries.

The talented footballer, who was wearing the uniform of Catholic boys’ school St Bonaventure’s, in Forest Gate, when he was attacked, had recently tried out for League One team Ipswich Town.

Baptista, who was described as an affectionate boy who ‘would always make you laugh’, had phoned his mother Josephine to say he was on his way home just 20 minutes before he was fatally knifed.

The aspiring footballer was described as a ‘nice, popular boy’ who made ‘everyone laugh’ (Picture: PA)

His mum had offered to pick him up from school due to the delays on the DLR route amid Extinction Rebellion protests.

But he said he would catch the bus after school instead, as he wanted to go to McDonald’s with a friend.

His aunt Aretha Adjei said Baptista’s heartbroken mum ‘keeps saying how she should have gone and picked him up’.

She told the Evening Standard: ‘His mother is not coping well. She only has two children. You can’t imagine her pain…

‘No one could say a bad word about him, he would never join a gang or a group. That’s not him.’

Just five hours after Baptista was knifed, an 18-year-old was found with stab wounds near a children’s nursery in Brandon Estate, Camberwell, south London.

He died shortly later, said Met Police, adding that his next of kin have been informed.

Formal identification is yet to take place and a post-mortem examination will be held in due course.

Police called the stabbings a ‘senseless attack’ as they called for witnesses to come forward.

No arrests have been made in either murder and police say they are not linked.

Their deaths take the number of teenagers murdered in the capital this year to 23.

Boy, 15, arrested after teenager stabbed to death in Stratford

Following the news of the two deaths, Mayor Sadiq Khan, said: ‘I am utterly devastated to hear that two teenagers have been killed on our streets.

‘Knife crime is stealing the futures of our young people and it is devastating to our communities. It has to stop.’

Trade Minister’s promise to open Komenda Sugar factory ‘a me...
28 minutes ago