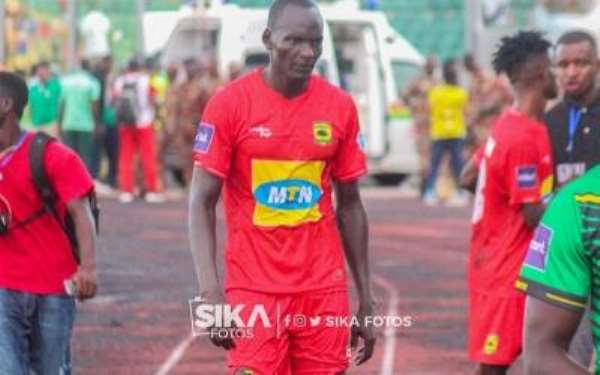 Ugandan forward, George Abege has finally opened his goal-scoring account for Kumasi Asante Kotoko three months after joining the side.

Having signed for the Porcupine Warriors from Kenyan side Kariobangi Sharks in July, the lanky but strong forward got his first goal on Saturday, October 12, 2019, in a friendly match against Bekwai Youth Football Academy.

The Kumasi-based club faces a stern opposition in Ivorian side FC San Pedro in the CAF Confederations Cup after being knocked out by Etoile du Sahel in the Champions League.

In a bid to ensure the team prepares very well for the upcoming two-legged encounter, the side engaged Bekwai Youth in a warm-up game earlier today. Summer signing George Abege score the last goal of what finished as 4-0 thrashing in favour of Kotoko.

Abege will now be hoping to score in a competitive game for the Reds when they take on FC San Pedro later this month.

Meanwhile, Burkinabe import, Sogne Yacouba also managed to get a hat-trick for himself on the day to remind the club of what he brings onto the table.