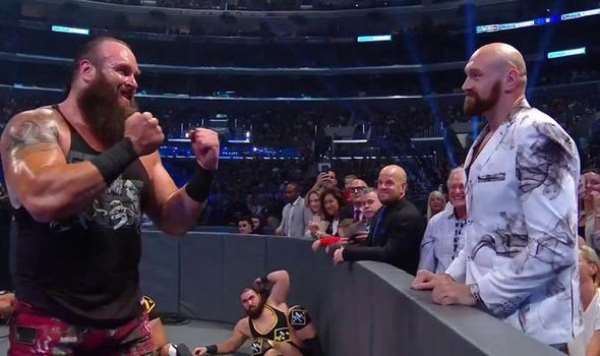 Fury will make his WWE debut on October 31 at a pay-per-view Crown Jewel event in Saudi Arabia.

The pair clashed last week at Friday's SmackDown, with Fury at the event as a spectator before getting involved in some orchestrated beef with Strowman and fellow wrestler Dolph Ziggler.

The hysterics continued on Monday night's Raw as Fury and Strowman had to be separated by security in the ring after a shouting match, with other wrestlers joining in.

At a press conference in Las Vegas on Friday, it was confirmed the heavyweight and self-professed "lifelong WWE fan" would step into the wrestling ring.

WWE executive vice president Paul Levesque, more commonly known as Triple H, said: "Braun Strowman will step into the ring with the man who is undefeated in 30 fights, the 6ft 9in 'Gypsy King', Tyson Fury.

"This match between two larger than life athletes was ignited in a moment that captivated the entire world last Friday night at SmackDown."

Fury said: "I would like to take this opportunity to say how honoured I am to be here. It is something I have always dreamed of, being a lifelong WWE fan.

"I am undefeated in 30 professional contests and when I go to Saudi Arabia to fight Braun Strowman, I will still be undefeated. I am going there to knock Braun Strowman out."

Strowman added: "Tyson Fury is a bad dude, especially when you take into consideration what he has overcome.

"But in WWE, we don't wear gloves, you are coming into my world."