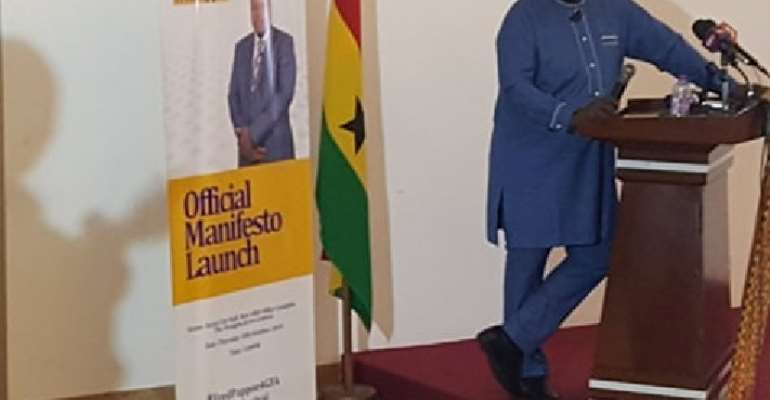 Mr. Fred Pappoe, one of the Presidential hopeful of the Ghana Football Association (GFA), has said he would initiate steps to make Ghana football globally competitive when elected by delegates.

At the launch of his manifesto in Accra on Thursday at the Accra City Hall inside the new AMA Complex, Mr. Pappoe hinted that his vision was based on five tenets which include Redeeming, Reviving, Repairing, Recovering and Restoring Ghana Football.

Professor Mrs. Goski Alabi chaired the ceremony which was attended by other contestants like Lawyer Ankamah Mensah and Kurt Okraku aka ‘Game Changer’, as well as candidates competing for the Executive Committee positions.

Mr. Pappoe, who was once Vice President of the GFA said the image of Ghana football had been battered and bruised, therefore there was urgent need to trigger steps to rebrand the image to make it very appealing to the corporate world, fans, among other stakeholders.

“Ghana football is at crossroads considering the bad times we have been in over the past year. Fortunately, we have a second life as an association and on September 5, 2019, a new set of rules and regulation which are based on fortunes of the past and aspiration for the future.

“My vision is to have a GFA that is globally recognized, respected and competitive, with its products such as the national team, local football, players, administrator, technical staff among others being of the highest stock of marketability.

He said that a strategic plan had been drawn to address all challenges confronting domestic league, national team, women’s football, juvenile league among others and also to ensure transparency in its financial administration.

The media presence was huge with some pressmen coming from other regions, and Nana Aba Anamoah and Eloi Amande, the MCs were impressive just like the man of the day, Fred Pappoe.

Delegates of the GFA would go to the polls on Friday, October 25 to elect the President and Executive Council members who would manage the affairs of football for the next four years.

Pappoe is number 3 on the ballot paper.