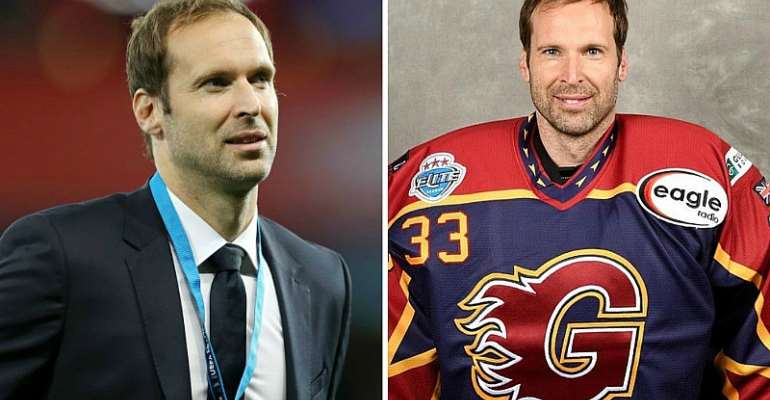 The Czech, a big fan of the sport, has got his skates on after working on his game since retiring from football.

"I hope I can help this young team achieve their goals," Cech, 37, said.

"After 20 years of professional football, this is going to be a wonderful experience for me to play the game I loved to watch and play as a kid."

Cech, who arrived in Britain in 2004 having signed for the Blues, adopted top-flight Elite Ice Hockey League side Guildford Flames as his team.

Cech, who made 124 appearances for the Czech Republic, won four Premier League titles, five FA Cups, three League Cups, the Champions League and Europa League during his time as a footballer in England.

He will be the Phoenix's third-choice keeper and will train when his Chelsea schedule allows.

Posting on Twitter on Wednesday night after the announcement, he said: "Some people seem to think I've changed my job. No I didn't.

"Luckily my job at Chelsea doesn't stop me in my spare time from playing the game I loved as a kid and which I've been playing for years. While being a professional footballer I couldn't play the game for obvious reasons. Now I can."

Andy Hemmings, Guildford's head coach, said: "The signing of Petr is massive for the Phoenix, he is a great guy who trains hard and I cannot wait to see him make his debut."

Former Germany keeper Wiese made a winning start at a WWE live event in Munich on 3 November 2016. Former Burton and Port Vale keeper Tomlinson was offered a developmental contract with WWE, but neither he nor Wiese made an official televised appearance. Ex-Norwich striker Holt won his first fight when he was the last man standing in a 40-man Royal Rumble earning him the Crusher Mason Memorial Trophy.

Dudek and Barthez have competed in 24-hour endurance races while fellow goalkeeper Canizares crashed off the road in his Suzuki at the Sierra Moreno Rally.

Leon McKenzie & Curtis Woodhouse - boxing
Former Peterborough and Norwich striker McKenzie won eight of his 11 bouts while midfielder Woodhouse won 24 of his 31 fights and even won the British light-welterweight title.

Gabriel Batistuta - polo
The former Fiorentina striker ended his career with an ankle injury but took up polo in 2009.

Bixente Lizarazu - Jiu-jitsu
Lizarazu won the World Cup with France and the Champions League with Bayern Munich, then took up Jiu-jitsu, in which he became a European champion.

Clive Allen - American football
During 1997, the former Tottenham striker played as a placekicker for London Monarchs in NFL Europe - a competition that ran from 1991 to 2007.

Gary Lineker - cricket
The former England and Tottenham striker played for the MCC against old foe Germany in 1992 at Lord's.