WAFU Cup Of Nations: Ghana To Face Senegal Or Mali in Final 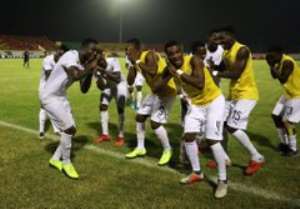 Ghana is likely to face Senegal or Mali in the grand finale of the 2019 Cup of Nations tournament after eliminating Cote d’Ivoire in the semi-finals on Tuesday night.

The tournament which is being played by national teams made up of home-based players is currently ongoing in Senegal and has gradually shaped up ahead of its climax this weekend.

In a cracking semi-final encounter yesterday, the Black Stars triumphed with a 3-1 win against the Elephants to secure qualification to the final and on course to successfully defend the trophy they lifted two years ago.

In the other semi-final game, Senegal will come up against Mali later today. The winner of that game will book a date with Ghana in the final which will be played on Sunday, October 13, 2019.