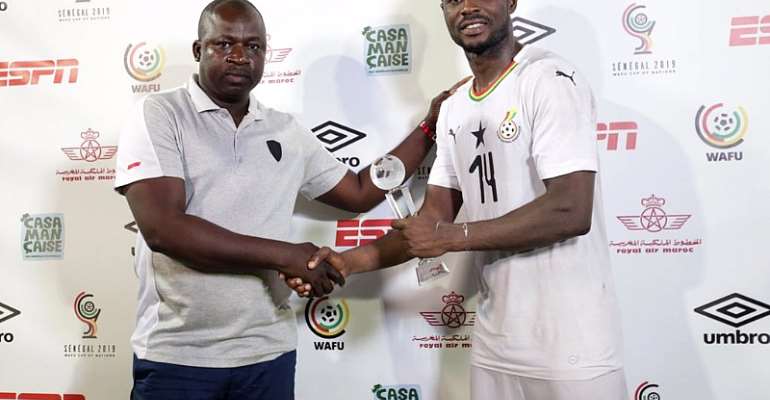 Obuasi Ashanti Gold striker, Shafiu Mumuni has dedicated his ‘Man of the Match’ accolade from Ghana’s 3-1 win against Cote d’Ivoire to head coach of the team Maxwell Konadu as well as his teammates.

The forward who is the captain for the Black Stars B team was in fine form and exhibited his goal-scoring prowess that ended up propelling his side to the finals of the 2019 WAFU Cup of Nations tournament.

He scored a sensational hat-trick on Tuesday night to power Ghana to an emphatic win against their opponent from Ivory Coast. The first of the three goals came in the first half when his back deflected a clearance into the opposition’s net.

A quick brace at the beginning of the second half completed his hat-trick on the day which earned him the ‘Man of the Match’ accolade at the end of the game.

Speaking in a post-match interview, an elated Shafiu Mumuni has dedicated that award to his manager as well as his entire teammates.

The attacker has four goals and is in contention to finish the 2019 WAFU Championship as the top goal scorer.

Construct your own roads if you can build GHS5m mansions; st...
24 minutes ago