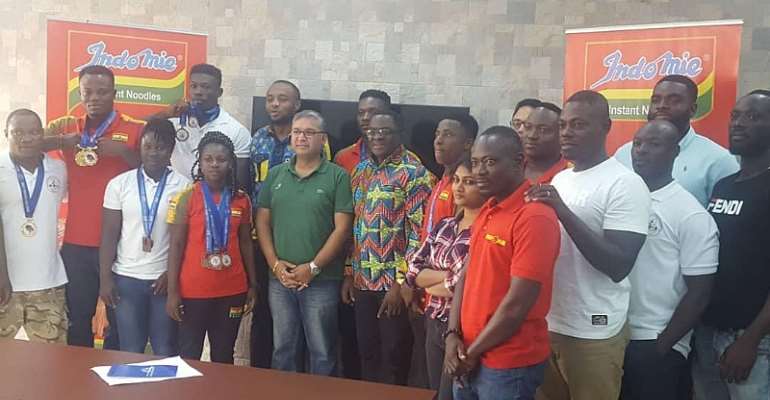 The Ghana Weightlifting Federation (GWF) has been hailed by their sponsor, Indomie for winning medals at major international competition.

The GWF on Friday paid a visit to Dufil Ghana Ltd producers of Indomie to thank the management and to present the 17 African medals that the team (The Black Cranes) has won so far from three different continental championships in 2019.

It will be recalled that at the last African Games in Rabat, Weightlifting won 8 of the 12 medals won by Ghana at games.

Indomie who are an official sponsor of the Youth and Junior teams and the partner behind the Weightlifting Talent Identification programme started by the GWF 3 years ago. Indomie supports the programme with 5000 GHS and products, every quarter.

“It is out of the programme that we have been able to produce all the African and Commonwealth Medallists that the country can boast of today, most of whom have been doing weightlifting for less than three years,” said Ben Nunoo Mensah.

The team was welcomed by the CEO of Indomie, Mr Mahesh Shah, Mr Bahaguna, the Marketing Manager, Ninash and staff of the company.

Mr Shah said the energy and strength that our children get when they eat Indomie is clearly being manifested in the performance of the Ghana Weightlifting Team over the last 3 years.

The medal winners for 2019 presented are Christian Amoah, 8 medals made up of 3 gold, 2 silver and 3 bronze, Winifred Ntumi, 4 medals all bronze. David Akwei,1bronze medal and Forrester Osei who won 4 medals, made up of 3gold and 1 silver.