Three Things We Learned In The Premier League 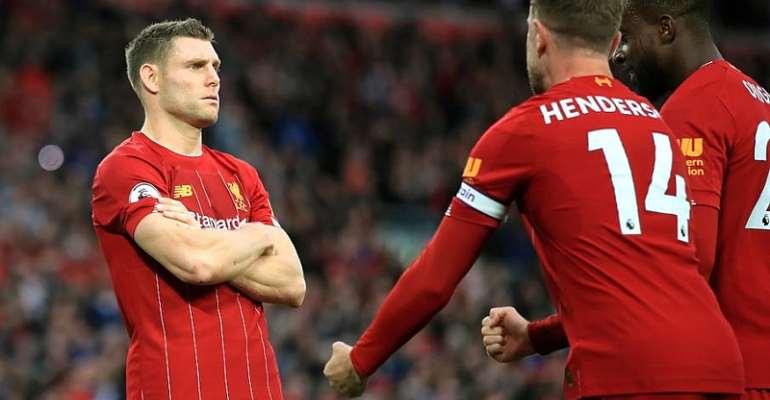 Liverpool opened up an eight-point lead over Manchester City as the leaders clinched a dramatic win over Leicester, while the champions crashed to defeat against Wolves.

Manchester United's problems mounted with a loss at Newcastle and Tottenham are in turmoil following their 3-0 reverse against Brighton.

Here, we look at three things we learned from the Premier League this weekend:

LIVERPOOL SHOW CITY HOW TO GRIND
This was a weekend where City could realistically have hoped to close the five-point gap at the top. Instead they end it eight points back and facing a mountain to climb to retain their title.

Not for the first time in recent weeks, Liverpool found a way to win, this time thanks to a 95th-minute penalty scored by James Milner to see off the considerable challenge of Leicester 2-1 at Anfield.

Jurgen Klopp reminded his title challengers last week it is better to win eight games 1-0 than one game 8-0 after City trounced Watford by that scoreline a fortnight ago.

City have been hamstrung by injuries to Aymeric Laporte and John Stones, leaving their lack of centre-back cover exposed.

And with Laporte not due back till the new year, the gap could even get bigger in the coming months.

Liverpool host the champions at Anfield on November 10 in what increasingly looks like a must-win for City.

MAN UTD CRISIS DEEPENS
Ole Gunnar Solskjaer's ashen face told the story of Manchester United's latest abject failure as the beleaguered boss looked to the heavens at the conclusion of their 1-0 loss against Newcastle.

United haven't won away since March and their only victory in their last five matches in all competitions came on penalties against minnows Rochdale in the League Cup.

Solskjaer is a United great but that status might not be enough to save him from speculation about his future unless results improve quickly.

"It's my responsibility. I need to sort their heads out. Young boys lacking confidence, they need some help from experienced players and staff," Solskjaer said.

But it doesn't get any easier for Solskjaer when the action resumes after the international break as red-hot Liverpool are United's next opponents.

SOBER OCTOBER FOR SPURS
Tottenham's stuttering start to the season had seemingly hit rock bottom with a 7-2 thrashing by Bayern Munich in midweek, but even worse was to come against far more humble opposition in Brighton.

The Seagulls had not won and scored just two goals in six Premier League games, but were well-worthy of their win that leaves last season's Champions League finalists searching for answers.

Mauricio Pochettino insisted he is not worried about losing his job and the Argentine will be given plenty more time to turn the situation around after five stellar seasons in charge.

But there is increasing evidence that in his sixth campaign, Spurs have gone stale and either an overhaul of the playing squad or a change in management may be needed to find their spark.