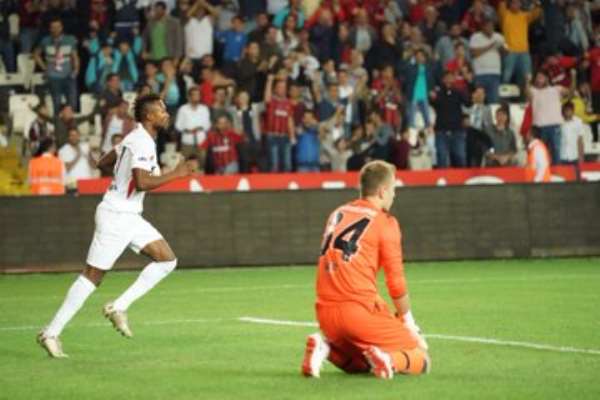 Ghanaian international Patrick Twumasi found the back of the net on Sunday but unfortunately ended up on the losing team when his Gazisehir Gaziantep FK side was beaten 2-1 by Istanbul Başakşehir.

The two clubs met on match week 7 of the 2019/2020 Turkish Super Lig season in search of another 3 points before going into the second international break of the campaign.

The on-loan Patrick Twumasi started the match for the home side at the Gaziantep Stadium following his impressive displays in the last couple weeks.

He showed fine form once again and emerged as one of the best players at the end of a drama-filled match. Enzo Crivelli opened the scoring for Başakşehir on the 13th minute.

Though Gaziantep was reduced to 10 men some minutes later, Patrick Twumasi scored on the 24th minute to give his side some lifeline before the half time break.

A second-half strike from Enzo Crivelli restored the lead for the away side who eventually emerged as 2-1 winners.

Twumasi, 25, now has 4 goals in the Turkish Super Lig and has established himself as one of the key players for his club.

Construct your own roads if you can build GHS5m mansions; st...
4 minutes ago