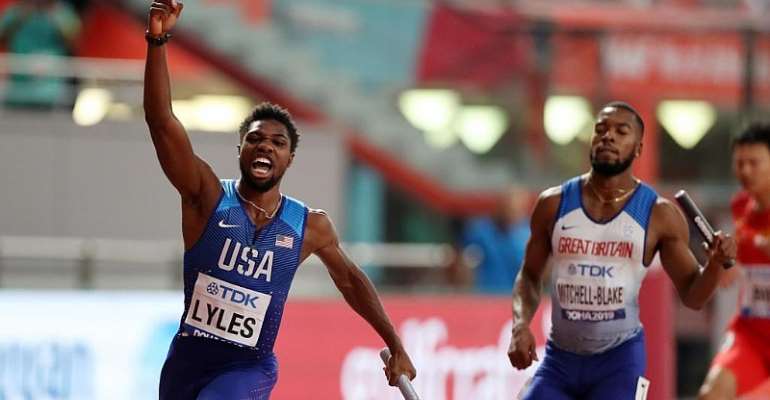 Hassan, from the Netherlands, added the 1500 metres title to her 10,000m crown when she crossed the line in a championship record of 3:51.95 seconds.

Fraser-Pryce, winner of the 100 metres last Sunday, returned to the track and ran the second leg in a Jamaican 4x100m squad that set the season's best time of 41.44 seconds. It was her ninth gold medal at world championships since 2009.

“I'm grateful for the opportunity I get to showcase my talent,” said Fraser-Pryce who missed the 2017 championships to have a child.

“I could not have written this story. It is a beautifully written story. It wasn't without pain and sacrifice and I'm grateful to everyone who has made this journey worthwhile.”

Britain, anchored by the 100 metres silver medallist Dina Asher-Smith, was second and the United States was third.

Revenge
The American men, runners-up to the British quartet two years ago in the 4x100m, reversed that order in Doha.

Coleman, the 100 metres champion, set off and handed over to Justin Gatlin, the 100 metres runner-up. He passed the baton on to Michael Rodgers and then Lyles, winner of the 200m, powered home in 37.10 seconds, the fastest time over the distance in 2019.

“It's been a great couple of weeks for me,” said Coleman.

Gatlin added: “It's been a brotherhood. We've always had a lot of fast guys who make it to the finals in the 100m and 200m but we've never really had time to bond, get to know each other and really count on each other when we needed to go up to the line and get the job done.

Close
The United States picked up gold and silver in the men's shot put courtesy of Joe Kovacs' championship record of 22.91cm and Ryan Crouser's throw of 22.90.

“I threw a personal best and I go home with a silver medal. I couldn't be happier,” said Crouser. Defending champion Tomas Walsh from New Zealand collected bronze.

Yulimar Rojas and Hellen Obiri, however, managed to retain their titles.

Rojas, 23, from Venezuela leapt 15.37m to secure the triple jump ahead of Shanieka Ricketts from Jamaica and the Colombian former world champion Caterine Ibarguen.

Her Kenyan compatriot, Margaret Chelimo Kipkemboi, was second and 22-year-old Konstanze Klosterhalfen from Germany pocketed the bronze at her first world championships.