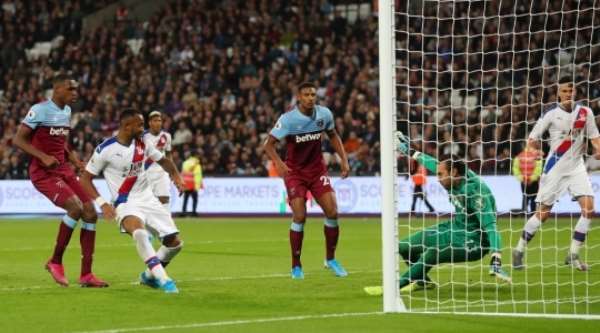 Black Stars forward Jordan Ayew scored a late goal on Saturday evening to help his Crystal Palace side post a 2-1 victory over West Ham United at the Liberty Stadium in the English Premier League.

In a match that produced some fine display from both sides, it was the visiting team that picked up all 3 points as they go into the second international break of the 2019/2020 season.

Both teams looked well-matched from the blast of the kick-off whistle even though the hosts seemed like they could go on to nick it at the end of the regulation time.

Following several missed opportunities from both sets of attackers, referee Michael Oliver whistled to end the first half with nothing to separate the two sides.

An improved second-half performance from West Ham United quickly paid off on the 54th minute when summer signing Sebastien Haller connected to a cross from Ryan Fredericks to give his side the lead.

They, however, could not finish off the match with momentum on their side and allowed Palace to grow in their strides. A 63rd-minute penalty kick converted by defender Patrick van Aanholt restored the balance of the game.

Three minutes to end proceeding, Ghanaian attacker Jordan Ayew who had worked tirelessly all evening scored to give Palace the lead for the first time in the match.

His strike was ruled out for offside by the referee but had to be given upon review by the Video Assistant Referee (VAR).

Ayew was substituted for the final couple of minutes of the match but will be happy to have scored his third goal of the season.