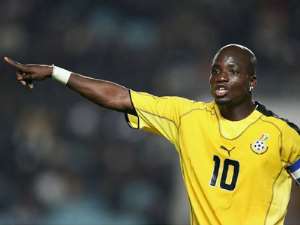 ...Refused US Visa? The Captain of the Black Stars, Stephen Appiah is out of the international friendly against Mexico. Appiah was expected to join his colleagues in camp yesterday to prepare for the game, but failed to turn up No concrete reasons have been given by the GFA as to the absence of the Stars' talisman. However, according to an Accra-based FM station, the Fenerbahce star is still nursing an injury picked up last month at the African Cup of Nations hosted by Egypt. "This cannot be the case" said a soccer analyst. "Appiah has played in all league matches for his Turkish club since he returned from the nations cup" he added. Can it be possible he was refused a visa to the US? The friendly game will be the first by the national team since their first round exit from the MTN Nations Cup competition in Egypt. Head Coach of the Black Stars Ratomir Dujkovic has called as many as seven new players into the squad in a bid to assess their performance ahead of the World Cup finals. Some of the new additions include Otto Addo based in Germany, Patrick Agyemang and Elvis Hammond both based in England and Alex Techie Mensah. The absence of Stephen Appiah might be problem in terms of the midfield options of the team with Laryea Kingston also absent from the squad. Meanwhile, Italy based Sulley Ali Muntari has arrived in Dallas from Italy ready for the game. Germany based Isaac Boakye and Matthew Amoah, Israeli based Sammy Adjei and Baffour Gyan are also out.