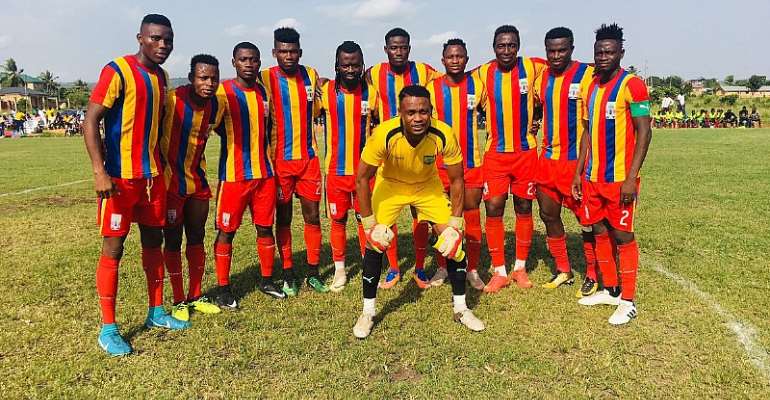 Accra Hearts of Oak earlier today suffered a 2-1 defeat at the hands of Nigerian side Sahel Sporting Club (SC) in an international friendly match at the Pobiman Park.

The Ghana Premier League giants played as hosts to their counterpart from Nigeria in a warm-up game as Phobian head coach Kim Grant continue preparations with his lads in anticipation to the start of the 2019/2020 League season.

At the end of a very good exercise, it was Nigeria’s most successful club in terms of League titles that reigned supreme by emerging as 2-1 winners even though they had to finish the game with 10 men.

The guest took a deserved lead just 25 minutes into the first half courtesy a strike from Ghanaian international Bright Korley.

The Rainbow lads took control of the game but disappointingly ended the half on the losing side.

Just 5 minutes after resuming the second half, Kojo Obeng Jnr who is in banging form in the off-season leveled things for Hearts of Oak with a thumping effort into the opposition’s net.

Sahel SC was reduced to 10-men before the hour mark but still managed to finish the game with the win. A well-taken free-kick by Moucthar Yacouba hit the back of the net to ensure Hearts finished the friendly on the losing side.

The Accra-based club will continue their exploits in pre-season next week when they take on regional rivals Great Olympics in the 2019 Homowo Cup.