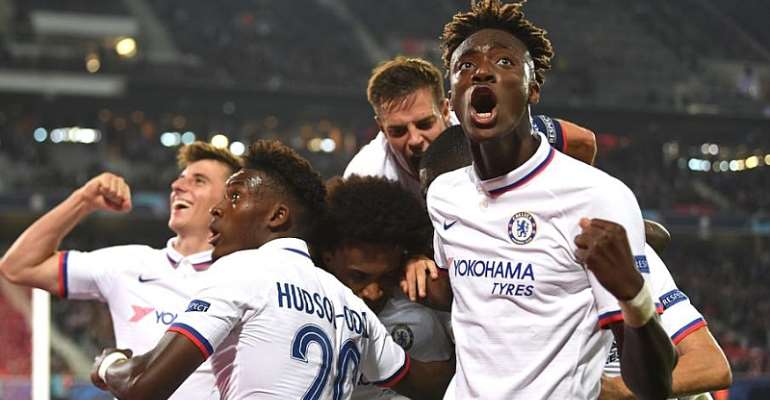 Willian's brilliant late strike gave Chelsea a precious a 2-1 win away to Lille on Wednesday that they will hope kickstarts their Champions League campaign, but it was the young stars in Frank Lampard's side who stole the show again.

The Brazilian volleyed home in the 78th minute to decide the game under the roof at the Stade Pierre-Mauroy on what was his 300th appearance for the club.

Tammy Abraham had earlier put Chelsea in front on his 22nd birthday with his eighth goal already this season, only for Victor Osimhen to equalise for Lille.

Chelsea are now off the mark in Group H after losing at home to Valencia a fortnight ago, although it is Ajax who continue to top the section with a maximum six points.

"Overall it was a good game. It's never an easy place to play. Give it to the team, what a fantastic performance," Abraham told BT Sport.

Lampard's team face Ajax next and will do so with renewed belief after this potentially pivotal victory.

"It is such a tough place – the roof was on, the crowd were up for it, the speed in their team and on the counter-attack especially was very evident, so we had to be ready for it and I thought our performance was really good," said Lampard.

It was a game decided by one of the most experienced players on the pitch but which was bristling with exciting young talent as these clubs adjust to seeing their standout players – Eden Hazard on one side, Nicolas Pepe on the other – depart in the close season.

Lampard fielded two 24-year-olds as well as four more players aged 22 or under in his line-up here, as teenager Reece James started as a right wing-back in a 3-4-1-2 system.

James only made his top-team debut for the club a week ago in a League Cup tie against fourth-tier Grimsby Town. His second-half replacement, Callum Hudson-Odoi, set up the winning goal.

"This isn't a game for niceties, we have to go and win these matches and improve all the time and there were loads of signs of team improvement tonight, and individuals," Lampard added.

"The young players are responding and they have to keep doing it because the Champions League level is something else."

Much has been made of Lampard's promotion of youth this season in response to Chelsea's transfer ban, although their team here also featured N'Golo Kante, with the France midfielder returning from his latest spell on the sidelines.

Indeed, the average age of Chelsea's team at kick-off was actually a year older than that of Lille.