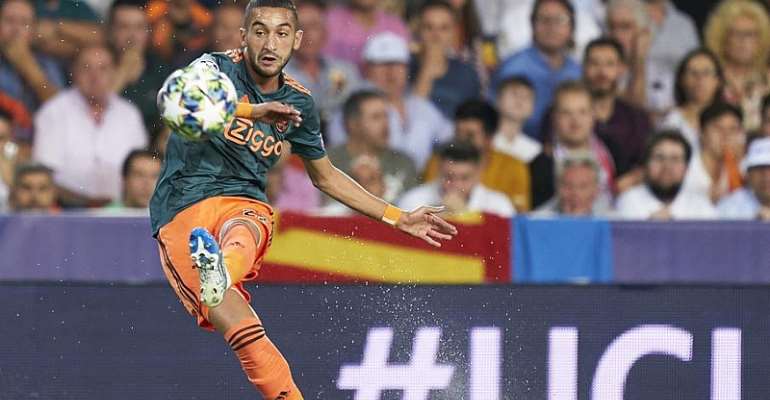 Ziyech's stunning strike gave Ajax an eighth-minute lead at Mestalla before Daniel Parejo missed a penalty for the hosts and Quincy Promes made it two.

An excellent team goal finished off by Donny van de Beek, capped another eye-catching display by Ajax as they continued to make light of losing Frenkie de Jong and Matthijs de Ligt to Barcelona and Juventus in the close season respectively.

"In the first half, Valencia were much better, in my eyes. We didn't defend well," the 22-year-old Van de Beek told uefa.com.

"The second half was much better – we made nice goals and winning 3-0 away is really nice. We made the changes and finished them well. In the end, we could have had one or two goals more."

Erik ten Hag's men now lead the group by three points from Valencia and Chelsea after the Londoners edged out Lille 2-1 in France in Wednesday's other game.

Ajax beat Lille 3-0 in Amsterdam a fortnight ago and have now stretched their unbeaten away run in the Champions League, including qualifiers, to 13 matches.

"I still believe we have some things to improve, but we can play such fantastic football," said Ajax coach Ten Hag.

"At times on the sideline, I can really enjoy us playing football. Not many teams can do this at Mestalla."

It was Valencia heaviest European home loss since a 3-0 reverse against Swansea City in the 2013-14 Europa League group stage, and their worst in the Champions League for 15 years, dating back to a 5-1 thrashing by Inter Milan.

"It's a tough loss. It's a heavy defeat –- maybe not deserved but that's what happened," said Valencia coach Albert Celades.

"We had chances in the first half but didn't take them, but we played well. They were more clinical than us in front of goal."

FixingTheCountry Movement to march in support of Akufo-Addo'...
25 minutes ago