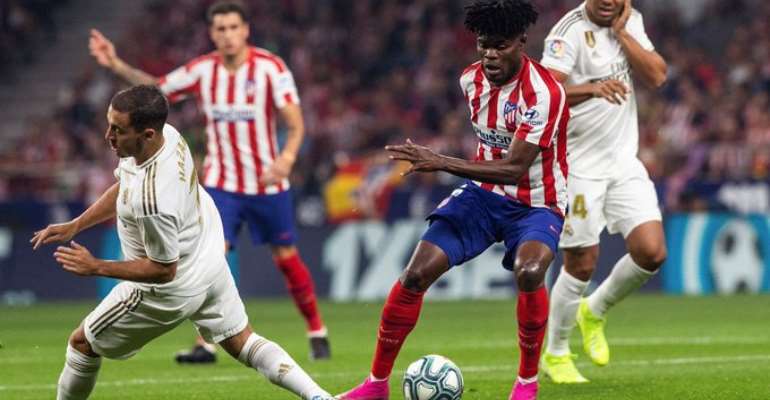 The football realm has experienced an immense amount of talented African footballers from those who have retired and have written their names in the books of legend to the current ones dominating headlines.

Futaa takes a look at the top five Ghanaian players who put on impressive performances for their respective clubs over the weekend.

Thomas Partey - Atletico Madrid (Spain)
The midfield maestro needs no introduction and rightfully so. Partey was arguably the best outfield player in the Madrid derby.

He displayed a range of passing and the 26-year-old made the difference and in attack and the wall in defense respectively.

Kwadwo Asamoah – Inter Milan (Italy)
Asamoah made a return to the starting lineup and it proved fruitful as his performance inspired Inter Milan to secure their sixth consecutive victory in the Serie A on Saturday, September 28.

The 30-year-old made approximately 40 passes making him the third-highest of Inter players to feature on the pitch - he totalled an accuracy of 82.5%, also making three clearances and three interceptions.

Andre Ayew – Swansea City (England)
The Ghana national team captain was in the starting lineup against Readin and provided the perfect assist for Baston Borja who put Swansea in the lead in the 3rd minute of the game.

Ayew has not scored for the Swans yet this season but he has been involved in three assists from six matches played so far.

The 28-year-old has made eight appearances in all competitions for the Welsh-based club so far this season.

Andy Yiadom –Reading (England)
Yiadom has been on top for Reading and he is one of the reason's why Swansea aren't occupying the top of the English Championship table.

The Ghanaian denied Steve Cooper’s men their sixth league win of the season as he drove his effort past goalkeeper Frederick Woodward in the 90th minute for Reading.

The effort was the 27-year-old’s first goal for Reading since September 2018, which ended his 12-month goal drought in the Championship.

The Red Bull Salzburg midfielder continued his fine start to the season as he scored the equaliser. His goal opened plentiful opportunities as Salzburg won 4-1 on Saturday.

Despite joining the Austrian champions in 2017, Ashimeru has never had to be a regular in the first team after being sent on three different loan spells. However, the 21-year-old has seized the moment and plays like a new signing.

So far, he has featured in seven matches for Salzburg, scoring two goals and assisting one.