'Blame Us For Africa Exit Not Officiating' - Felix Annan 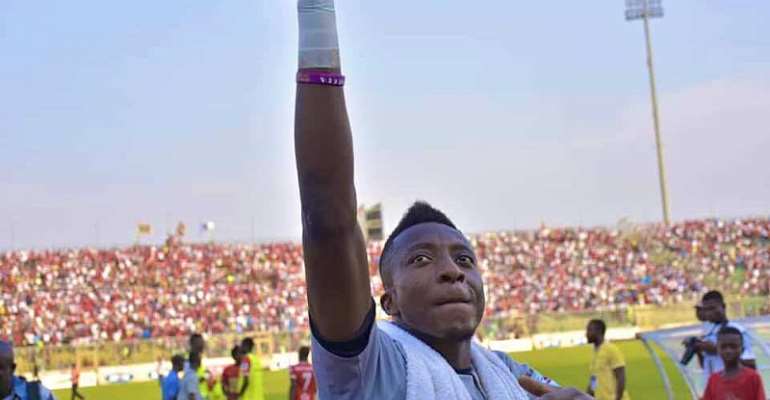 Asante Kotoko skipper, Felix Annan has admitted the players must be blamed for their CAF Champions League elimination against Etoile du Sahel

The Ghana Premier League side suffered a 3-0 defeat in Tunisia on Sunday to throw away a 2-0 win in the first leg against Etoile du Sahel.

The first goal Kotoko conceded over the weekend was via a dubious penalty awarded against them, yet Felix Annan has indicated that he won’t blame their defeat on officiating, but they didn’t do enough to merit qualification ahead of the Tunisian giants.

“It is a very painful defeat. We are not going to blame officiating or anything. We weren’t really at our best. I think our best was not enough. We had so much hope coming into the game after the first leg. It is unfortunate we couldn’t qualify to the group stage which we all wanted but this is the game. This is what football is made up. Sometimes there are ups and downs,” he told Kotoko Express.

Annan urged his teammates and disappointed fans to let go of the pain. “We just have to pick ourselves up. We have the chance to be in the Confederation Cup play-off. We just have to put it behind us. It’s hard to take.l We have disappointed a lot of fans. It is very painful’ he admitted.

In a game that saw Etoile being handed dubious penalty, Annan couldn’t hide his opinion on the performance of the referee while calling for fair play in the game. “I was disappointed. We are making Africa football look so bad. Sometimes, you look at such decisions and you want to say, this is not true. I don’t know what CAF will do about this but there must be fair play in football.

The goalie further explained why he confronted the referee after his bad penalty decision. “I hope there can be a solution to it because every team invests and try to do their best and your quality has to show, not a referee deciding the game.

“As I have said, even though the officiating was bad, I don’t think we were any better. What we wanted to do; I don’t think we did it. As captain, I wanted the referee to know that, what he was doing was not right. We had worked a lot and we were there for business. That’s why I approached him to tell him, he was unfair.”