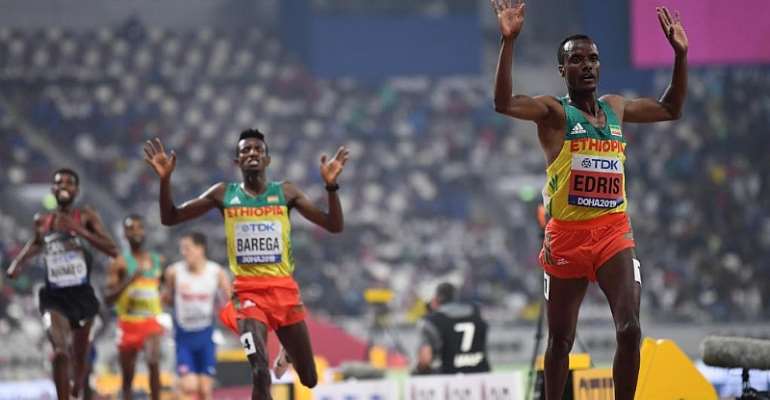 After three days of stayaways and silence, the Ethiopians took over the Khalifa International Stadium with noise and vigour. Aloha Doha.

Avoid the taxis
The review has been struck down. No, not by the heat and humidity but by tales of dissected families. As the metro system isn't quite yet finished – will be though for the 2022 football world cup – we've had very little choice but to take taxis to the Khalifa International Stadium. Three of the drivers so far have told of living away from their families in Pakistan, Ethiopia and Sri Lanka. All of them in Doha working to send money back home. Financing a better life in this manner renders them perpetually elsewhere. “I'm here in Doha,” said the Sri Lankan driver. “But my mind is there.”  Ultimately it is a zero sums game. “If I stayed at home, we would have no chance.”

Get a grip
It was a night when three defending champions held on. Karsten Warholm became the third man to retain a 400 metres hurdles title. Muktar Edris joined Mo Farah and Ismael Kirui as a winner of back-to-back 5000 metres titles. However Mariya Lasitskene trumped the lads. She is the first woman to claim a hat trick of high jump crowns.  “I'm really happy to be a triple world champion,” she said. But there'll no celebrations. She is preparing for the military world games in Wuhan in China at the end of the month. Such discipline.

Goldilocks
On the subject of multi-prize women ... Shelly-Ann Fraser Pryce was back at the stadium for the award ceremony for the 100 metres. The 32-year-old won her fourth gold over the distance on day three. During that race, her locks were a range of colours. For the presentation, her mane was as yellow as her Jamaica track suit top. Her smile, like her performance, was sparkling.

Redemption
During the women's 3000 metres steeplechase final at the 2017 world championships, Beatrice Chepkoech missed a water jump. She had to go back and take the barrier. The mid race blunder cost her vital seconds and she finished in fourth place. No errors in Doha. She took the lead early and never relinquished her hold to finish in a championship record of 8:57.84. Emma Coburn, who won the 2017 title, was second nearly five seconds behind the Kenyan.

Fans?
Deadpan days at the Khalifa International Morgue were rowdily interrupted as the Ethiopians transformed the sombre stadium with singing, dancing and cheering that appeared unseemly. So stultifyingly sullen had we become. The mob went beserk at the climax of the men's 5000 metres as Muktar Edris and Selemon Barega battled for supremacy down the home straight. Mohammed Ahmed, who came third, feasted on the din. “Hearing the roar of the crowd was great,” said the Canadian. “Even if they weren't really cheering for me, the noise makes you want to run faster.” Oi, organisers, rent that crowd.