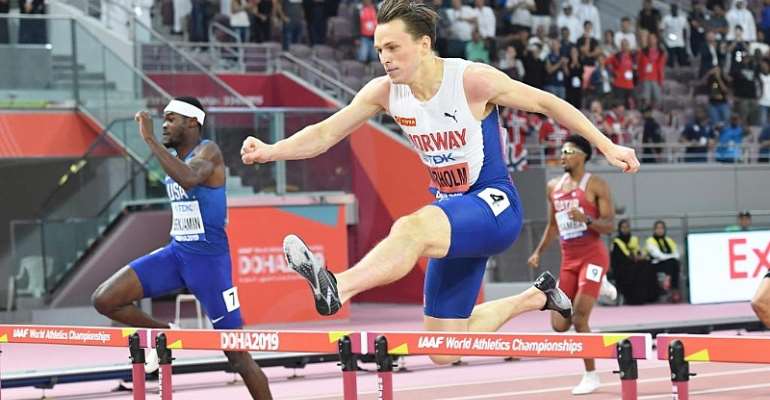 Karsten Warholm joined a fabled group of men on Monday night when he won the 400 metres hurdles for the second time in a row. The 23-year-old Norwegian clocked 47.42 seconds to claim gold and his place in the pantheon with Edwin Moses, Felix Sanchez and Kerron Stewart.

Rai Benjamin was second and Qatar gained its first medal of the championships when Abderrahman Samba collected the bronze.

“I'm so happy for the win,” said Warholm. “It is one of my biggest achievements. It feels so good. It's been a long season. Now I can take a vacation and to have the gold, it's the biggest thing.”

While Warholm takes his break he may ponder how he will stay ahead of Benjamin and the fast improving Samba.

Supremacy
The tension was palpable as the finalist went through their pre-race routines.

Once underway, the defending champion appeared under threat only towards the end. But he cleared the final hurdle with more aplomb than Benjamin and held firm.

“I feel pretty good. I'm happy to come home with the silver medal,” said Benjamin. “I've learned a lot this season and I'm excited about that and I'm looking forward to coming back and getting it started again.”

Muktar Edris retained his 5000 metres title with a last gasp sprint past his fellow Ethiopian Selemon Barega. Edris's victory in a season's best time of 12:58.85 allows him to join Ismael Kirui and Mo Farah as the only men to have won twice on the trot.

The 26-year-old, who is one of only 30 Russian athletes allowed to compete in Doha under the authorised neutral athlete banner, leapt 2.04m to pip the Ukrainian Yaroslava Mahuchikh who celebrated her 18th birthday just before the start of the championships.

"It was like in a fairytale to get a third world title," Lasitskene said. "My whole country expected me to be on the podium. I had to cope with this pressure."

And there was redemption for Beatrice Chepkoech in the women's 3000 metres steeplechase. Two years ago in London glory eluded the Kenyan when she failed to take a water jump and had to go back before being allowed to continue the course.

In Doha she raced home in a championship record time of 8:57.84. Emma Coburn, who took the gold in London, finished second nearly five seconds behind her.