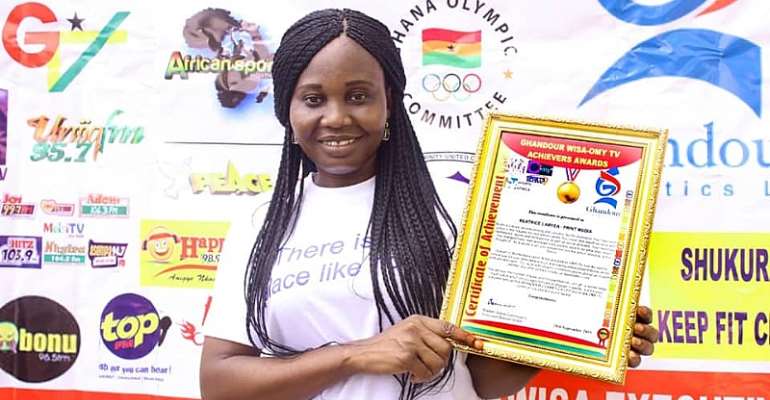 2019 Women In Sports Association (WISA) / Ghandour / OMY TV awardee Beatrice Laryea has urged her colleagues in the sports media to use their various platforms to affect the lives of their sources positively.

According to her, Journalism is a tool for development and not for destruction charging her colleagues to be moderate in their critique of athletes, coaches, sports administrators and other stakeholders.

Speaking to the media on the sidelines of the awards ceremony held last Saturday at the Accra Sports Stadium, Beatrice noted that it was important for sports Journalists to be mindful of their reportage knowing the extent of damage they can cause with their write-ups.

“So many of our athletes need help such as transfers abroad for career progression, scholarships to study abroad and training opportunities among others.

We need to speak with the athletes, coaches, sports administrators and the other stakeholders in the industry and write stories about them focusing on their humble beginnings, educational backgrounds, family life, how they got into sports, their dreams and aspirations for the future among others,” she said.

PROLIFERATION OF THE MEDIA
She continued: “Such interviews, profiles and compelling stories will create positive images about them, especially the athletes, to enable them attract those contracts and scholarships whether locally or internationally. With the proliferation of the internet, news travel very fast and far, especially bad news so we should be considerate in our reportage of negative stories.”

“That does not mean that we cannot criticize them when they go wrong. We can do that but in moderation considering the fact that they also have families, they worry, they feel pain and complain about such negative reportage. Sometimes we are overly critical and we end up denting their images,” he stated.

A total of 27 sportswomen and six teams who excelled in their respective endeavours were honoured at the fifth edition of the awards.

Also present were representatives from the National Sports Authority, Ghana Olympic Committee and the Sports Writers Association of Ghana (SWAG).