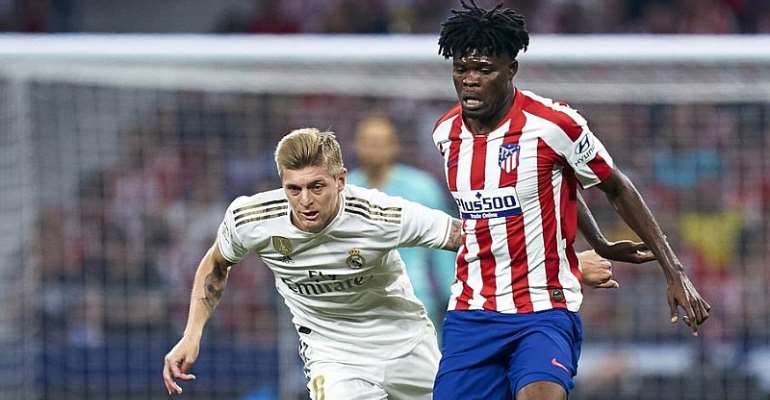 Real Madrid and Atletico Madrid tied 0-0 in a derby clash on Saturday while Spanish champions Barcelona beat Getafe 2-0. Here are five talking points from the weekend in La Liga:

REAL MADRID STABLE AT LAST
Real Madrid edged the derby clash with Atletico and their defence passed their toughest test yet.

For the first time under Zinedine Zidane, Madrid have kept three consecutive clean sheets in La Liga, with the goalless draw at the Wanda Metropolitano following wins to nil over Sevilla and Osasuna.

Madrid failed to shut out opponents in any of their first five games in all competitions, looking extremely fragile as an under-strength Paris St Germain shredded them in the Champions League.

"We've been working on (defending), to be more solid," said Madrid captain Sergio Ramos. "I think that our morale is really high at the moment."

BARCELONA END AWAY DAY MISERY
Away days had become harrowing for Barcelona, who finally won a competitive game away from Camp Nou at the ninth attempt.

The Catalans did so without Lionel Messi, Ousmane Dembele and teen sensation Ansu Fati, with an impressive performance at the Coliseum Alfonso Perez against a stubborn Getafe.

This was also the first clean sheet they have managed this season and will ease some of the pressure on coach Ernesto Valverde.

"If you want to win La Liga you have to win a lot of games away from home, not just your home games," said the former Athletic Bilbao coach, stating the obvious.

ON-SONG OCAMPOS
Once upon a time Lucas Ocampos was labelled the 'Argentine Cristiano Ronaldo' and even if, at 25, he's not been able to fulfil that promise, Sevilla have nabbed themselves an impressive and dynamic talent.

Joining in the close season from Marseille, Ocampos has had an instant impact in the south of Spain and his wonderful goal helped Sevilla come from behind to beat Real Sociedad 3-2 on Sunday.

The victory stopped the visitors from moving top of La Liga.

Ocampos, who also impressed against Real Madrid last weekend, scored a brilliant individual goal early in the second half, thrashing home after surging into the area.

PARTEY TIME
Diego Simeone admitted his team was disappointing in their derby draw with Real Madrid, but one player he couldn't reproach was Ghanaian midfielder Thomas Partey.

He was the game's outstanding performer, creating chances for Diego Costa and Joao Felix, which went unfinished.

Thomas isn't always a guaranteed starter for Atletico but Simeone may finally concede that it is Partey time and give the player a run of starts.

BOTH SIDES OF THE COIN FOR LEVANTE
Hernani Fortes scored for Levante in the fourth minute of their 1-1 draw with Osasuna and then was dismissed in the 72nd.

The Portuguese forward saw his second yellow card for a scything tackle from behind on Chimy Avila.

Curiously, Hernani was the third player at the club to manage the same feat in 2019, after Erick Cabaco against Athletic Bilbao and Ruben Rochina against Osasuna.