I Must Improve To Be A Real Madrid Galactico - Hazard 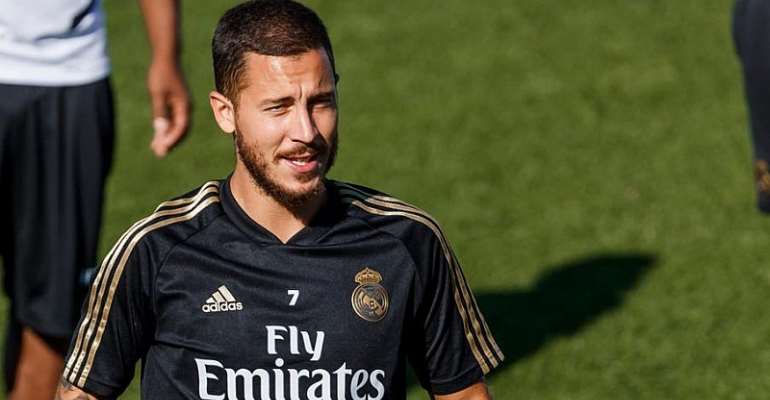 Real Madrid forward Eden Hazard said he needed to improve to live up to his 'Galactico' billing after a slow start to the season, having failed to score or assist for his new side.

The Belgian winger joined from Chelsea this summer for 100 million euros ($109.07 million) as the marquee signing in the club's overhaul after a disastrous 2018-19 campaign.

Hazard is viewed as the replacement for Cristiano Ronaldo in Madrid's side, with the team's all-time top scorer departing for Juventus in the summer of 2018, and has inherited his No 7 shirt.

"I'm not a Galactico yet, I have to show that I can be one," Hazard told reporters on Monday ahead of Real Madrid’s Champions League clash with Club Brugge.

"We all know the history of the No 7 at this club and I want to show that I can be the best in the world. I want to give my all, not just in matches but in training too."

After reports that he arrived for the pre-season overweight, Hazard suffered a thigh injury on the eve of the season and could not make his Madrid debut until September 14, in a 3-2 win over Levante.

The 28-year-old has started three games since then but been far from his best.

"I can do better, I'm critical of myself as well, but working every day we will change things," he said.

"Not everything is perfect but we’re first in La Liga, we lost in Paris, maybe I was set back because of the injury but now I’m at 100 per cent and hope to give my all in the coming games.

"Now I’m not injured and I just need to score goals, be decisive, do what everybody expects from me. When I start to score and get some good performances everything will be easier. I’m missing a goal or assist to start to turn things around."

Madrid lost their opening Champions League match 3-0 at Paris St. Germain and are looking to get back on track against Brugge at the Santiago Bernabeu on Tuesday.

Coach Zinedine Zidane backed Hazard ahead of the clash.

"I know how it works, I was worse when I arrived in Italy, there I took three months (to hit form), at Madrid a bit less," said the former Juventus and Madrid midfielder.

"Hazard is the same, I know he will triumph here but the important thing is to be calm and back him."