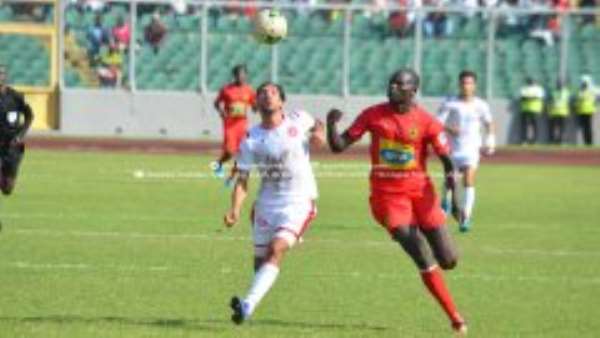 Tunisian giants Etoile Sportive Du Sahel defeated Ghana Premier League side Kumasi Asante Kotoko 3-0 in the second leg of the final play-off round to the CAF Champions League on Sunday at Monastir.

The Porcupine Warriors went into the fixture with the lead on aggregate after winning the first leg 2-0 when they hosted their counterparts at the Baba Yara Sports Stadium two weeks ago.

In need of 3 unanswered goals to overturn that result, Etoile did just that and sent Kotoko home packing from the CAF Champions League.

A first-half penalty kick from Mortadha Ben plus a second-half brace from Karim Laribi were enough to secure qualification to the group stage of the competition for the Tunisians.

Despite crashing out of the Champions League, all is not lost for Kotoko as they still have a chance of playing in the CAF Confederations Cup.

Watch highlight of the match in the video below.