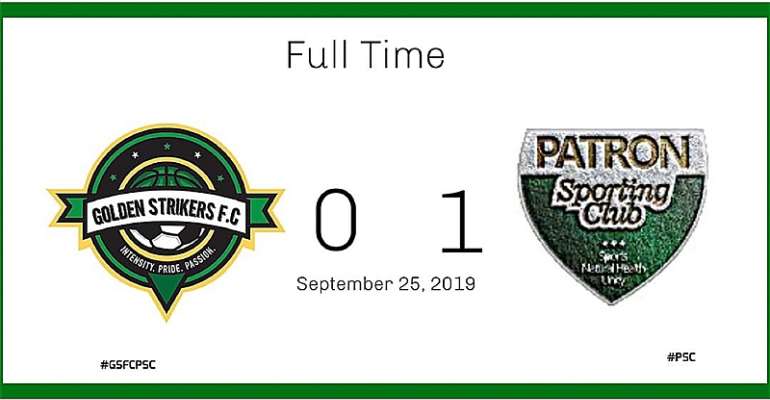 Despite being denied several scoring attempts by the opponent’s goalie, Abanga, PSC’s newest midfield sensation scored the opening goal which will go on to separate the sides. Though he’d one that was controversially ruled offside, kept on to perfectly execute the tactics of Coach Mohammed.

The first half entertained the supporters who trooped into the University Farm Park, Nmai-Dzorn, Accra to witness at first hand the local derby.

Patron SC is unbeaten in two matches after their last defeat to Accra Hearts Of Oak in late August 2019. The match lived to the bill for the fact that new formation and systems implored by the PSC coach successfully passed “the baptism of fire” by Golden Strikers FC.

Virtually new players were given the opportunity to start the match ahead of the usual eleven: Asamoah had his debut in the sticks and Abanga debuted in the heart of the midfield.

Most of the players tried the secondary roles which were led by Edmond Prince Agyei Boateng, the Skipper. The display of good football in the first and aggressive defending in the second halves respectively. This is remarkable!

Golden Strikers FC, on the other hand, played the “first competitive friendly match” with their new gaffer, Coach Sule, who joins them from division one side Vision Football Club after former trainer Edwin Torto Joined Dreams Football Club as Assistant coach.

GSFC has the best time of the 90 in the second half when they dominated arguably every department of the game. They had themselves to blame when none of their build-ups was able to convert.