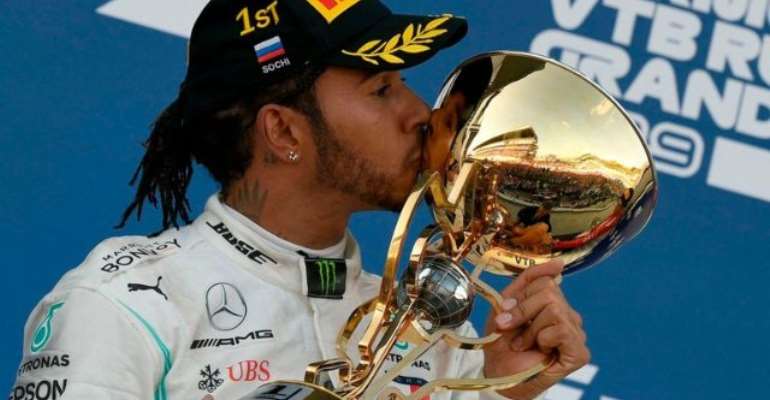 Ferrari looked set to end Mercedes’ dominant run at the Sochi Autodrom, but in the space of a few seconds, their hopes of victory vanished, with championship leader Lewis Hamilton seizing the advantage to seal a first Grand Prix win since the summer break.

Sebastian Vettel took a surprise lead at the start from third on the grid, leapfrogging pole-sitter and Ferrari team mate Charles Leclerc and Mercedes' Hamilton, with it soon emerging that Ferrari had plotted such a scenario pre-race as part of a plan to defend from Hamilton.

It worked, with Leclerc slotting into second, but when Vettel was asked to hand the place back to his team mate, the four-time world champion kept his foot down. After much discussion, and some consternation from Leclerc on team radio, the red duo settled into rhythm until the pit stops.

Leclerc pitted first and set a flurry of fastest laps which proved enough to undercut Vettel and regain what would have been the net lead. But on his first lap out of the pits Vettel pulled over on track with an energy recovery problem, to his absolute dismay. There was worse to come for Ferrari, though, because that retirement triggered the Virtual Safety Car, neutralising the race.

This allowed Hamilton, whose Mercedes team had instructed him to extend his stint on the medium tyres, to get what essentially amounted to a free pit stop. The Briton boxed for soft tyres and rejoined comfortably ahead of Leclerc, with the other Mercedes of Valtteri Bottas pitting and rejoining third.

A full Safety Car was then required when George Russell suffered an apparent brake issue, pitching the Williams driver into the barriers. Ferrari took the opportunity to bring Leclerc in for a fresh set of softs, dropping him behind Bottas but hopeful he could attack both Silver Arrows with a little over 20 laps to go.

But try as he might, Leclerc couldn’t get close enough to launch a proper attack on Bottas, while Hamilton was able to cruise away at the front, even having enough breathing space to pump in the fastest lap of the race to secure the extra bonus point.

The Briton crossed the line to secure his ninth victory of the season, stretching his championship lead to 73 points – almost the equivalent of three race wins – with just five Grands Prix remaining. Bottas, having rebuffed Leclerc, ended up second to give Mercedes their fourth one-two in Sochi in six attempts.

Leclerc completed the podium, failing in his bid to snatch the fastest lap of the race, with Max Verstappen in a lonely fourth place. His Red Bull team mate Alexander Albon pulled off a brilliant recovery from a pit lane start to rescue fifth, ahead of McLaren’s Carlos Sainz.

Racing Point’s Sergio Perez scored points for the third time in four races with seventh, with McLaren’s Lando Norris eighth. Kevin Magnussen and Nico Hulkenberg completed the top 10, the former after having five seconds added to his race time for an off-track moment several laps before the flag.

But the day belonged to Mercedes, who brilliantly took advantage of a supreme slice of luck to secure their eighth one-two of the season to edge closer to their sixth successive constructors’ championship title.