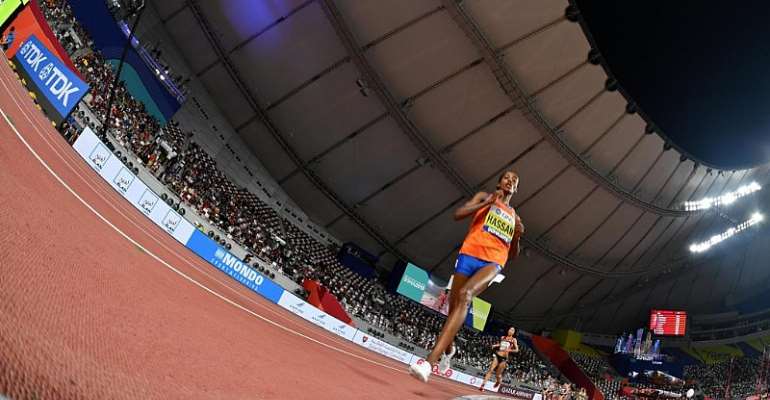 Sifan Hassan from the Netherlands claimed her first world championships title on Saturday night in the women's 10,000 metres. Hassan, 26, running over the distance for only the second time, won in the season's best mark of 30:17.62.

Ethiopia's Letesenbet Gidey was second and Agnes Tirop from Kenya claimed the bronze. Both registered personal best times of 30:21.23 and 30:25.20 respectively.

There was also a first world title for Tajay Gayle from Jamaica in the men's long jump.

Gayle launched himself 8.69m with his fourth attempt while Echevarria only managed 8.34m for bronze. Jeff Henderson from the United States was second.

Comeback
The Americans picked up another medal in the women's hammer. Deanna Price won the event with a throw of 77.54 metres.

"I didn't even think I was going to compete this year," Price said after her victory. "I was in a lot of pain. I couldn't even throw over 70 metres."

Outside the stadium, Japan's Yusuke Suzuki won the 50km men's walk as the defending champion Yohann Diniz failed to complete the course. The 41-year-old Frenchman had hit out at the absurdity of staging the race in the heat and humidity.

Just like in the men's race, the defending champion - Ines Henriques - did not complete the course.