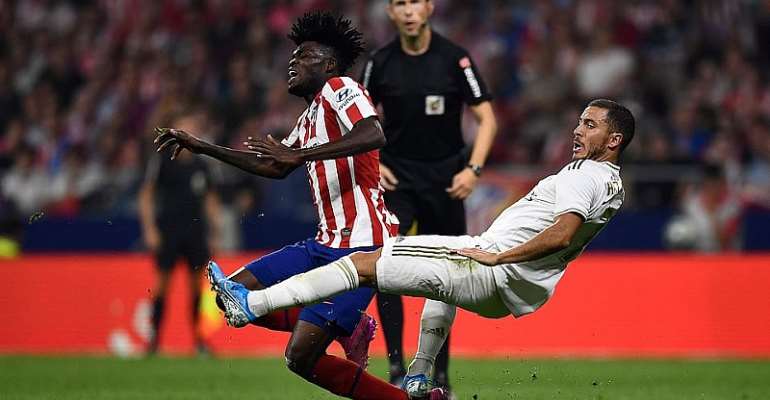 Ghana star, Thomas Partey has been rated high in the goalless Madrid on Saturday evening.

Partey was named by Atletico Madrid coach, Diego Simeone, in the starting lineup and in return, he gave a good show for the team but unfortunately, they could not find the back of the net despite creating some good chances.

The results leave Diego Simeone's side on the league log with 14 points at the 3rd position.

José Giménez – 7 – Colossal as always. Really relished (and dominated) the physical battles with the Madrid forwards.

Renan Lodi – 5 – Bright early on, but struggled to cope with the intensity of the game. Subbed on the hour.

Thomas Partey – 8 – Exceptional display. Solid defensively and constantly drove Atleti forward with his passing and movement. No one on the pitch was anywhere near his level, nor could they get there (and they sure tried). Looked like (ironically, given the opposition) Fernando Redondo reborn. A supreme display.

Koke – 4 – Didn’t stamp authority on the game. A floating nothing of a display.

Saúl – 5 – Pedestrian. Moved to left-back for the last 30 minutes where he showed a bit more gumption.

Vitolo – 5 – Ran hard but rarely with a focused end product. Wasted attacks on both flanks. Hooked at half-time.

Joao Felix – 5 – Should have scored early on when sent through by Costa. A few bright moments but faded majorly after half-time. Subbed with 20 minutes remaining.

Substitutes:
Angel Correa (for Vitolo ’46) – 6 – Instantly moved it quicker and with more purpose.

Thomas Lemar (for Lodi ’60) – 5 – Added more purpose and drive but had absolutely nothing in the final third.

Dani Carvajal – 7 – Worked hard up and down the right all night long. A ferocious display.

Raphael Varane – 7 – Devoured any and all Atleti attacks.

Sergio Ramos – 6 – Lucky to avoid an early yellow. Otherwise solid even if he trod the disciplinary tightrope on occasion.

Nacho – 7 – Crucial block on the half-hour, got his body between Costa and the ball and prevented a goal. Repeatedly put his body on the line for Madrid and created a superb chance for Benzema late o. A warrior performance.

Casemiro – 6 – Tackled as always. Couldn’t get a handle on Thomas.

Fede Valverde – 7 – Added a tremendous amount of steel to the Madrid midfield. A constant source of energy and defensive cover when Los Blancos needed it. Unlucky to be taken off.

Toni Kroos – 6 – Sprayed passes and shots but was shut down and outplayed by Thomas.

Eden Hazard – 4 – Madrid’s big signing was kept quiet by Atleti. A few impressive runs couldn’t disguise that he was massively unfit and completely at odds with all his team-mates.

Karim Benzema – 5 – Isolated. Unlucky to not score with a late header. Subbed at the death.

Substitutes:
Luka Modric (for Valverde 68′) – 7 – Put in a great cross just seconds after coming on. Looked bright and full of ideas.