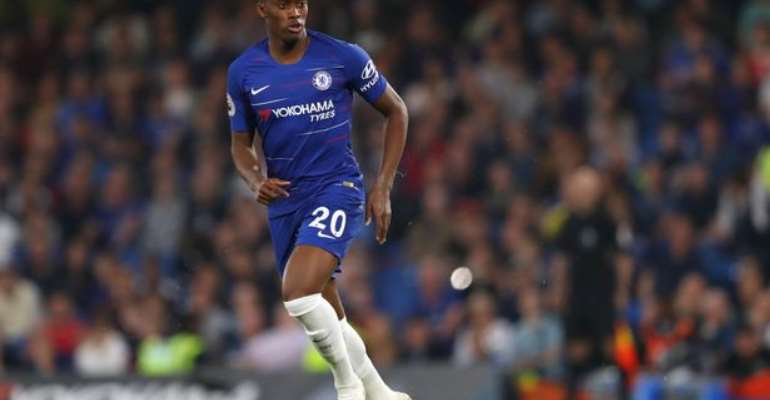 The English born Ghanaian winger made his first Blues appearance of the season in their devastating 7-1 Carabao Cup cup win over Grimsby Town and came off the bench in the Premier League victory against Brighton & Hove Albion on Saturday.

The 18-year-old highly-rated winger was sidelined for over 140 days after sustaining a serious ankle injury, marked his return with a goal against Grimsby and followed it up with an assist at home to Brighton.

Since coming through Chelsea’s esteemed academy he’s been heavily linked with a move to Bayern Munich that dominated much of last season.

However, Hudson Odoi earlier this month committed his long-term future to the Stamford Bridge-based team, which delighted manager Lampard who has given many of the club’s youngsters ample playing time under his tenure.

Expected to have a great career, Lampard feels for Hudson-Odoi to become “the best” he could do no wrong in following the example of Manchester City winger Sterling, who in the last few seasons under Pep Guardiola has gone from having big potential to being considered among the game’s very best.

“I know Callum’s talent and he has got huge talent. Hence why the club were so keen to get him signed up and we’re all delighted with that as a club,” he told reporters.

“But there’s a lot of work for Callum to do. Lots of work. I think you can look around and look at fantastic examples and not even at this club.

“I don’t like to talk about other club’s players but Raheem Sterling is an incredible example of a player with great talent whose work ethic added to that talent and [showed] improvement in a short period of time through absolute dedication [to become] a complete player that we are all wowed by. [Sterling] is exactly the great model for Callum, because he has those talents.

“I want him to be the best, the absolute best, because he has the potential to do that and a lot of that or some of that is some hard truths and I saw some hard truths in the game the other day and ways that he can improve and he needs to listen to them and he will. And then he can be that player for us, which is great news for everybody.”