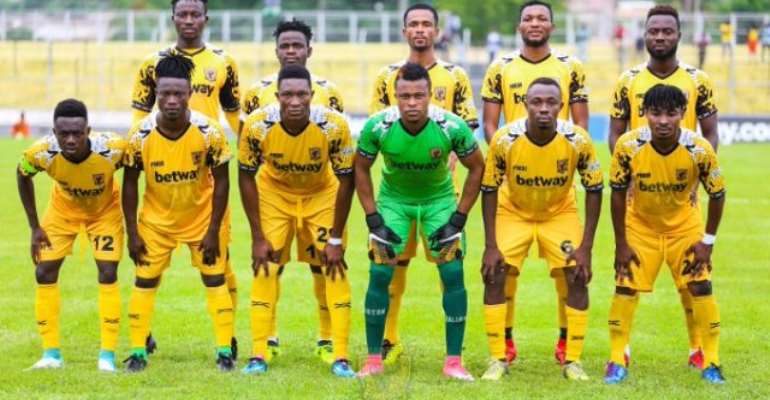 AshantiGold looks to hold on to a narrow 3-2 lead with a trip to Morocco’s RS Berkane for the second leg of Caf Confederation Cup qualifying round tie.

The Miners looked to be on course to record a resounding victory in the first leg with two first-half goals from Eric Donkor and Shafiu Mumuni but a lack of concentration allowed Berkane to level the score.

Amos Addai, however, scored to ensure the former Ghanaian champions ended up winning in Obuasi but the two away goals put last year’s finalist in a good position to qualify.

A draw will be good enough for Ashgold to progress to the play-off round of the competition while Berkane need a win.

What is the kick-off time?
The match will start at exactly 20:00 GMT.
Current form of both teams:
AshantiGold
The Obuasi-based club faced Asokwa Deportivo in a friendly ahead of the crucial CAF Confederation Cup tie. Marco Aurelio Silva made the difference as the Miners won 1-0.

They have been in good form on the competitive end, winning three of their past five matches (W3 D1 L1).

Their only defeat came at the hands of Karela in the NC Special Competition.

RS Berkane
RS Berkane are currently on a rough patch, losing three of their last five competitive matches and failing to grab a single win during that period (D2 L3).

They have lost to the likes of Zamalek and Chabab Atlas Khenifra in the past four months. The Oranges shared the spoils with FUS Rabat and Rapide Oued Zem.

Team news:
AshantiGold
Ricardo Da Rocha named an 18 man squad for their trip to Morocco. Appiah Maccarthy, Shafiu Mumuni, James Akaminko and Latif Anabila were included after playing for the Black Stars B.

RS Berkane
Tarik Sektioui has the luxury of a fully fit squad to choose from.

AshantiGold have scored ten goals in their last five competitive matches. RS Berkane have managed to score six times in as many games.

RS Berkane have conceded eight goals in their last five competitive games. AshantiGold in contrast have conceded half that amount in the same number of matches.