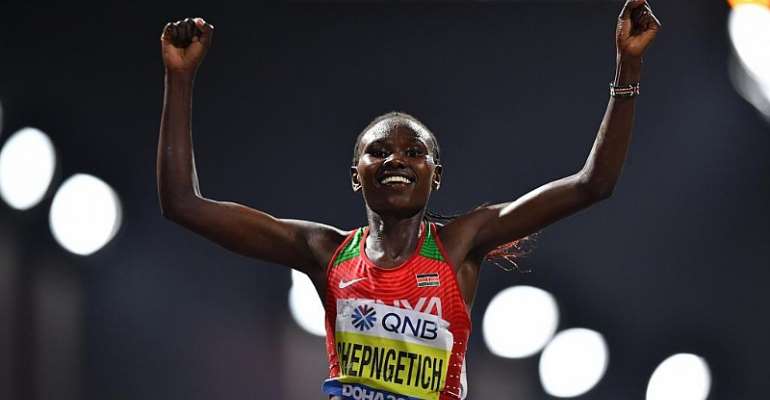 Ruth Chepngetich battled the heat, humidity and herself to claim the women's marathon in the early hours of Saturday morning.

The 25-year-old Kenyan finished the 42 kilometre course in two hours, 32 minutes and 43 seconds. Rose Chelimo from Bahrain was second and Helalia Johannes from Nambia took the bronze.

“I'm so happy,” said Chepngetich after a race in temperatures of more than 30 degress Celsius and 70 per cent humidity. “It was not so bad for me,” she added. “I ran in Dubai where the conditions are similar.”

Casualties
Others did not fare so well. Of the 68 who started the race just before midnight on Friday, 28 dropped out.

"You see somebody down on the course and it's just, extremely grounding and scary," said Canada's Lyndsay Tessier, who finished ninth. “You think that could be you in the next kilometre, the next 500 meters," added the 41-year-old."

"It was just really scary and intimidating and daunting. So that was enough to hold me back."

The International Association of Athletics Federations (Iaaf), which organises the world championships, told runners that the event's timing could be changed if conditions proved too dangerous.

Rethink
But after an opening ceremony along Doha's waterfront, the race went ahead with extra water points and medical teams lining the route

Marathon runners and long distance walkers do not have the luxury of competing in the event's main arena at the Khalifa International Stadium where ranks of air ducts maintain temperatures at between 23 and 25 degrees.

Yohann Diniz, who won the gold medal at the 2017 championships in the 50km walk, criticised the Iaaf for placing the event in the city centre. “If we were in the stadium we would have normal conditions," said the Frenchman.

"But outside they have placed us in a furnace, which is just not possible. They are making us guinea pigs."