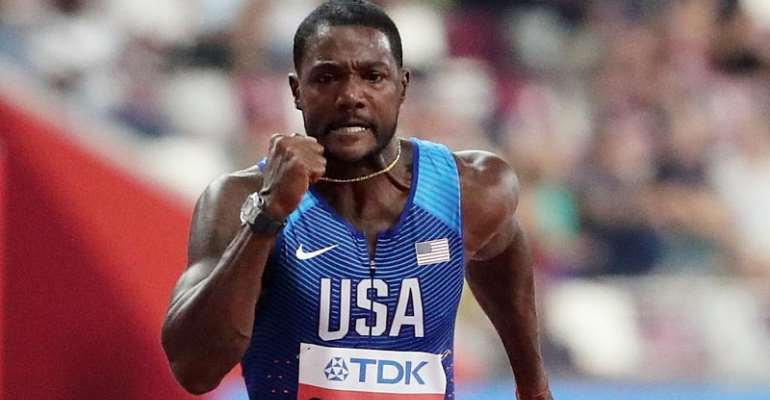 It's hot until you get into the stadium in Doha but just before the frost descends there's a heartwarming moment.

They're well behaved in Doha
Justin Gatlin was booed at the 2017 world championships before his races in the 100 metres. The fans at the Olympic Stadium in London apparently wanted to make their feelings clear about his dope-taking past. The American was the comic book baddie to Usain Bolt's goodie. With so much malevolence heaped upon Gatlin, there was karmic retribution when he ultimately won the 100 metres gold. That silenced the stadium. Fast forward two years and Bolt has retired. However Gatlin is still running. The 37-year-old trotted out and claimed the second heat of the first round in the 100 metres. No booing before and no jeering afterwards. What kind of fans are these?

Strange situation Part I
Because Usain Bolt was so dominant over the years in the 100 and 200 metres, only one sprinter, Yohan Blake, has had a title to defend at the world championships in the past decade. Blake won gold in Daegu in 2011 after Bolt was disqualified in the final due to a foul start. Bolt got the 100 metres title back in Moscow in 2013 and defended it in Beijing in 2015. Though Gatlin's now the man with the 100 metres crown, he says he's not feeling the pressure. “I don't come with the mindset that I'm defending as a champion,” he said after his 10.21 second saunter. “I'm thinking I'm here to win a championship. I want to be aggressive and get out there and compete.”

Strange situation Part II
He was a one that Usain. So now we have no buzz. No pre-race antics. No post-victory theatrics. Weird, no? Yes, says Gatlin. “Usain, when he's around, it's pandemonium,” Gatlin confessed. “It feels a little different without him but you see a lot of young guys stepping up to fill that void. I still think we'll have a great show.” The review remains to be convinced.

The heat is on
The myriad followers of the daily review will know that we do like to get our musical references in. Usually we wait a day or two but the world championships don't last very long and neither might the review in the searing heat and buckling humidity of Doha in late September. The Khalifa International Stadium is a wondrous thing. Sumptuously designed curves and a nuclear grade sound system. Powerful ducts frequently belch out cold air to keep temperatures down. Under these weapons of mass refrigeration, weakened beings in the stands have to get their cardigans on to avoid catching a chill.

Nice touch
Braima Suncar Dabo from Guinea-Bissau was so far off the pace in the first heat of the men's 5000 metres that the other competitors were already off the track and warming down as he started his final lap. Dabo though caught up with Jonathan Busby who was staggering along on his last lap. Rather than passing him, Dabo stopped and offered a shoulder to help Busby over the last 200 metres. The stadium stood to acclaim the gesture. Dabo eventually finished in 18 minutes, 10.87 seconds. It was a personal best time. On every level.