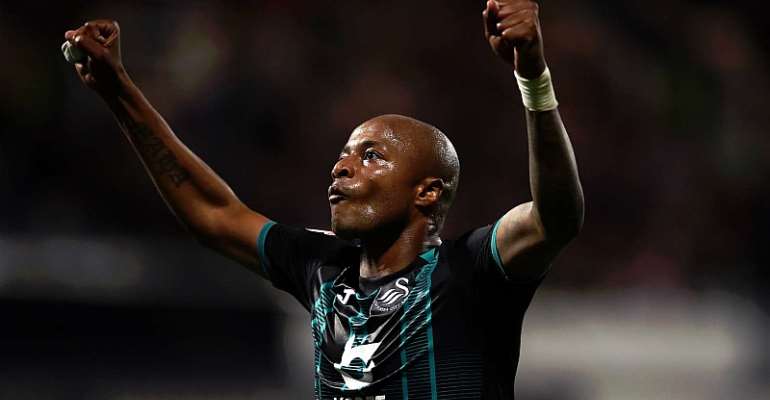 Ghana captain, Andre Ayew has revealed that he 'feels at home' at Swansea City insisting that he rejected a move from the club in the summer.

The 29 year old was linked away from the Liberty Stadium this summer.

However, Andre stayed with the Skybet Championship side spending last season on loan with Turkish side, Fenerbache.

"I am happy to be back," Ayew told BBC Sport Wales.

"I feel at home. There were a lot of possibilities for me to move.

"As soon as I got back I felt the desire from the manager, the players - they wanted me to stay - and for sure the fans. That was special for me.

"When I felt that I started to think maybe we have to go for it again.

"We were talking about finding a solution with other clubs. I said if I don't find something which suits me 100 per cent I am not going to move just to say I play in Ligue 1 or Serie A or the Premier League.

"The truth of the matter is a part of me wanted to stay here. A few days before the end of the market I told my agent: 'I have made my decision and I want to stay'."

Ayew signed for Swansea in the summer of 2015 on a free transfer from Marseille and scored 12 Premier League goals before West Ham United came knocking for his services the following year, in a £20.5 million deal.

He would re-sign for Swansea in January 2018 at the cost of a club-record £18 million but didn't have the same impact as his first stint in South Wales, and they were ultimately relegated after seven seasons in the English top-flight.

Ayew had played seven times for the Swans this season and is yet to break his duck in the Championship, though he has provided two assists.