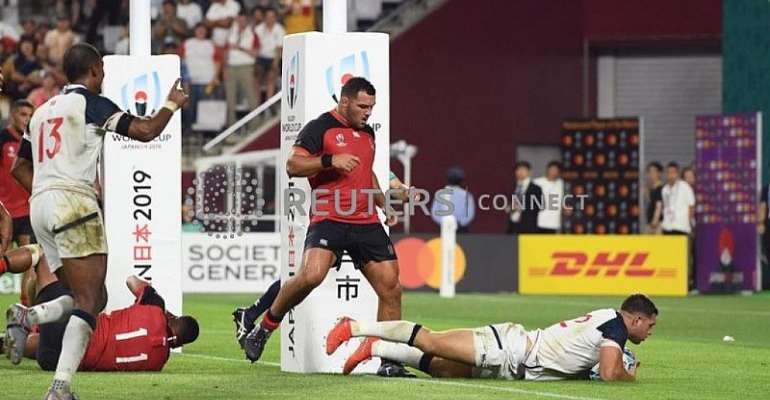 England made it two wins from two at the Rugby World Cup as they scored seven tries during a 45-7 rout of the United States in Kobe on Thursday. The match saw the Eagles receive the first red card of the tournament.

First-half tries from stand-in captain George Ford, Billy Vunipola and Luke Cowan-Dickie gave England a 19-0 lead at the break before Joe Cokanasiga secured the bonus point early in the second half.

Ruaridh McConnochie and Lewis Ludlam then scored their maiden Test tries before Eagles flanker John Quill was sent off 10 minutes from time for an illegal shoulder charge on replacement back Owen Farrell.

There was still time for Cokanasiga to grab his second try and England's seventh before Bryce Campbell ensured the USA avoided the embarrassment of being 'nilled' with a try after 80 minutes were up.

"Good win again. We had to work for it again. USA very physical, passionate team, so we had to earn that win. I thought we did that pretty well," said Ford.

England, the 2003 world champions, made 10 changes to the side that beat Tonga 35-3 in their Pool C opener in Sapporo last weekend for what was the USA's first match of this tournament.

Eagles get their wings clipped
Under the closed roof of the Kobe Misaki Stadium, the Eagles suffered an early setback when, after the opening scrum, 19-year-old prop David Ainu'u limped off injured in the third minute.

And three minutes later England had their first try.

Number eight Vunipola, making his 11th consecutive Test start, ran the ball from deep before Ford, leading England in place of the benched Farrell, spotted a gap in the poorly aligned defence and ran in a try between the posts which he converted.

Ford, declining a kickable penalty, booted the ball deep for an attacking line-out.

The ensuing rolling maul saw Vunipola driven over in the 25th minute, with Ford converting.