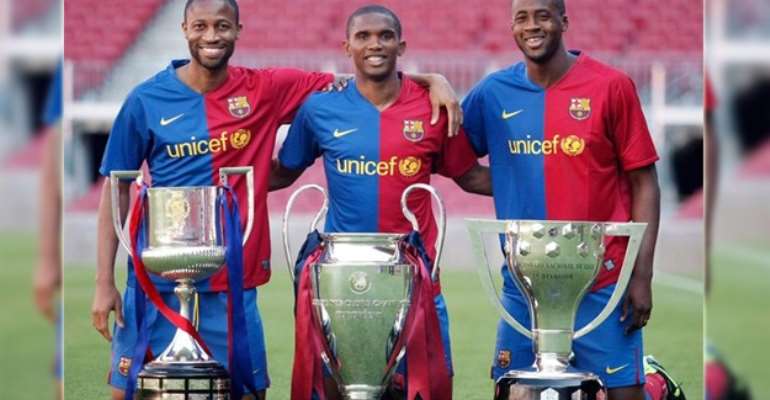 Cameroon and Barcelona legend, Samuel Eto'o has astonishingly revealed that former trainer, Pep Guardiola did not hug and congratulates any of the black players in Barcelona dressing room despite winning treble with the team.

Pep Guardiola spent four years at Barcelona as a coach and during his time there were three African players at the team he inherited.

However, Keita stayed at the club for all four seasons being a utility man in Barcelona's midfield whiles Eto'o left after Pep's first year before Toure joining Manchester City in 2010.

Despite clinching the UEFA Champions League, La Liga and the Copa del Rey in 2009, the former Inter Milan and Chelsea forward says, the Manchester City trainer demanded for a compulsory doping test for black players and did not hug and praise any of his black players.

Eto'o also shared that the Spanish trainer wanted Michael Essien tested after his stunning goal against Barcelona in the 2008/09 Champions League season.

"When Essien scored against us, Pep [Guradiola] suspected he was doping and demanded compulsory tests every game for black players," he said.

"Even after the treble, he refused to hug me, Yaya (Toure) or Seydou (Keita).

"It was one of the most embarrassing moments of my career," he added.

Following Guardiola's fallout with Yaya Toure at Manchester City, the Ivorian legend said he will gift Pep a cake when he fields five African players in his team.

"Maybe us Africans aren't always treated the same by certain people," Toure started. "When you see the problems [Pep] has often had with African players, everywhere he has been, I ask myself questions.

"He's too intelligent to be caught. He'll never admit [not liking African players]. But the day he picks a team with five Africans in it, I promise I will send him a cake!"