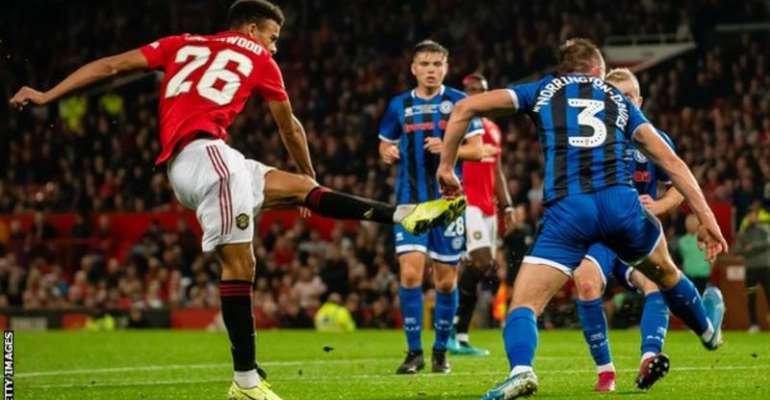 Manchester United needed penalties to beat neighbours Rochdale in the Carabao Cup third round on a tense night at Old Trafford.

Mason Greenwood put United ahead with a low strike but 16-year-old Luke Matheson smashed home a famous equaliser 14 minutes from time for League One Rochdale to force penalties.

Jimmy Keohane was the only player who failed to score in the shootout, with Sergio Romero saving his effort and United scoring all five efforts.

While the hosts, who had 31 shots during the 90 minutes, left the pitch rather sheepishly, Rochdale earned a standing ovation from the 5,500 travelling supporters.

United travel to Chelsea in the fourth round in the week commencing 28 October.

Last month, the biggest date in Matheson's diary was to collect his GCSE results from Trinity C of E High School in Fallowfield. He got 10 in all, including an 8 in PE, more than enough to allow him to enrol for the A-Level courses he feels will be beneficial if his football career does not work out.

School is less than five miles from the world-famous arena Matheson shook to its core with the first goal of his 14-match professional career.

United thought they had freed themselves from Rochdale's grasp through Greenwood's low drive.

But a team who conceded six at Peterborough and have been beaten by Manchester City Under-21s this season proved more difficult to get rid of than United imagined.

Eight minutes after Greenwood's goal, Matheson drove a volley into the ground after advancing into the box and sent it bouncing over Romero.

Matheson, who became the youngest player in Rochdale's history when he made his first-team debut 12 months ago, was mobbed by ecstatic team-mates.

United's efforts to regain the lead met with the same disappointment felt when Paul Pogba headed their best chance over in the first half and Marcos Rojo sent three long-range shots way off target.

Yet even the relief at a win came with a sting for manager Ole Gunnar Solskjaer, whose ailing side face a tougher test in the next round.