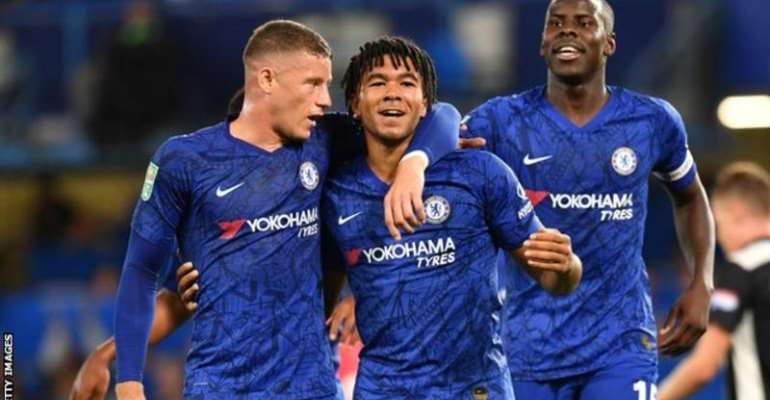 James, 19, set up Michy Batshuayi in the seventh minute before his superb cross was tapped in by Kurt Zouma.

He scored Chelsea's fifth late in the second half before Batshuayi slotted home his second goal.

Lampard said: "With his end product, Reece James showed what he can do. Two assists and a goal, but Reece's performances on loan last year at Wigan showed the talent he has got.

"I think he is going to be a big player for this club. It is just the start for Reece."

The Blues take on Premier League rivals Manchester United in the next round after they scraped past League One side Rochdale in a penalty shootout.

It is the fourth successive season in which they face United in a cup competition.

Batshuayi has played just 32 minutes in the league this season and was on the scoresheet for the first time since January 2018.

He was joined in the starting line-up by £58m signing Christian Pulisic and 18-year-old England international Hudson-Odoi - the latter returning from an Achilles injury suffered in April.

But it was James who impressed the most - linking up with Batshuayi in the build-up to the second goal and setting up Zouma with a superb cross from the outside of his boot after the break.

Grimsby's 32-year-old striker Green gave more than 5,000 travelling fans a glimpse of hope at Stamford Bridge as Chelsea were caught out by a long ball in the 19th minute, but from then on the hosts dominated.

Aside from an early volley from Elliott Whitehouse, Chelsea keeper Willy Caballero was barely troubled and the Blues recorded their 12th successive victory against a team from outside the Premier League in this competition.

Lampard added: "I thought Billy Gilmour ran the game from midfield, and Marc Guehi was solid. They've been outstanding this year.

"And the young subs showed how comfortable they are on the ball. Now the hard work starts to get in the team regularly."