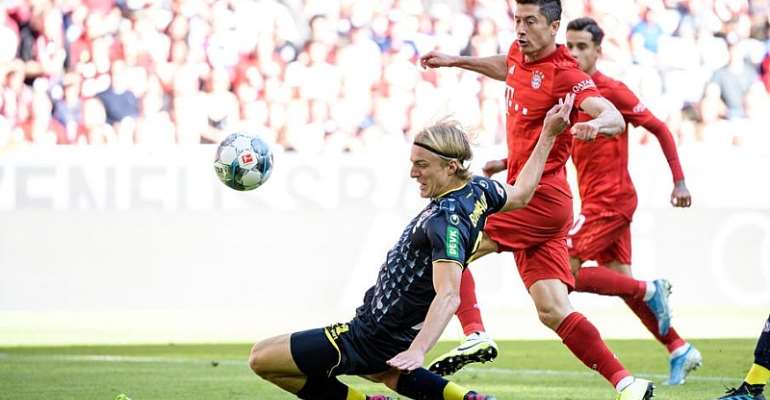 Philippe Coutinho's first Bayern Munich goal and a brace from Robert Lewandowski helped the German champions climb to second in the Bundesliga with a 4-0 thrashing of 10-man Cologne on Saturday.

He then doubled the hosts' lead with a header from a corner at the start of the season half to take his league tally to nine in five games.

Coutinho, on loan from Barcelona, converted a penalty on the hour at the second attempt, after Lewandowski gave the Brazilian the chance despite being on a hat-trick.

"It was a spontaneous decision, we didn't talk about it before the game," Lewandowski about giving Coutinho the spot-kick.

"It was important for him here at the Allianz Arena, for the future and his confidence. He is a great player and we must all help him."

Kingsley Ehizibue had been shown a straight red card just before the penalty for bringing down Coutinho in the area when the Brazilian was one-on-one with Cologne stopper Timo Horn.

Coutinho capped a superb display by setting up Ivan Perisic to slot the final goal on 73 minutes as Bayern climbed from fourth.

Having also netted in the mid-week Champions League win over Red Star Belgrade, Lewandowski has scored in each of Bayern's last seven games with 11 goals in all competitions.

He is the first to score in the first five Bundesliga games since Pierre-Emerick Aubameyang for Borussia Dortmund four years ago.

Bayern briefly topped the table before RB Leipzig replaced them in first place despite finishing with ten men in their 3-0 win at Werder Bremen.

A first-half header by defender Willi Orban and a stunning free-kick by playmaker Marcel Sabitzer saw Leipzig go 2-0 up before midfielder Konrad Laimer was sent off for a second yellow card for the last 26 minutes.

Bayer Leverkusen bounced back from their shock Champions League defeat to Lokomotiv Moscow in mid-week with a 2-0 win over Union Berlin.

Kevin Volland and Lucas Alario scored inside the opening half-hour as Leverkusen responded after director of sport Rudi Voeller had accused them of being "scared" against Lokomotiv.

Second-placed Freiburg wasted the chance to go top as forward Lucas Hoeler gave them the lead only for striker Florian Niederlechner to equalise for Augsburg in a 1-1 draw.

Hertha Berlin climbed off the foot of the table with a nervy 2-1 home win over Paderborn, who took their place at the bottom of the league.

Ex-Manchester City winger Javairo Dilrosun weaved past defenders to slot home on 10 minutes before forward Marius Wolf netted in the second half at the Olympic Stadium before striker Ben Zolinski pulled a goal back for Paderborn.