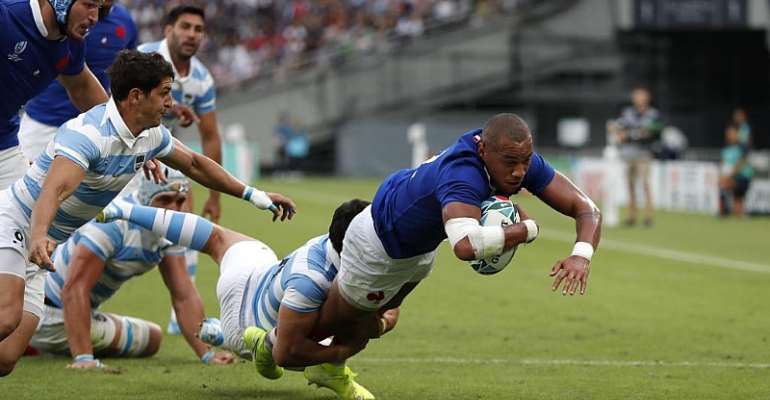 France produced some champagne rugby before almost losing the plot and had to survive a last-gasp penalty to pip Argentina 23-21 in their World Cup opener on Saturday.

Fly-half Romain Ntamack paced a schizophrenic French performance with 10 points as the three-time finalists hung on to win a pulsating Pool C clash in Tokyo and leave the Pumas staring into the abyss in the tournament's so-called 'group of death'.

Argentina, who will now likely need to beat England to avoid an early exit, almost pulled off an astonishing comeback after being sent into battle by an emotional rallying cry from football legend Diego Maradona.

Trailing by 17 points at half-time, they fell just short after a last-minute penalty from Emiliano Boffelli sailed just wide, allowing France to claim a crucial victory.

"But I am very, very proud of my boys. It was a tough game tonight but we are very happy to start the competition with a win."

A cagey opening was punctuated by some bone-shuddering tackles from both sides, Argentine fly-half Nicolas Sanchez sent sprawling by prop Jefferson Poirot in a monster collision.

Lock Guido Petti was a one-man wrecking crew for the Pumas in the early skirmishes and his bulldozing run led to a 15th-minute penalty that Sanchez slotted over to put the 2015 semi-finalists on the board first.

Their tails up, the French extended their advantage with another sumptuous try four minutes later when flying winger Damian Penaud caused panic in Argentina's defence before flipping the ball to Antoine Dupont to crash over.

A bruising game was played in a carnival atmosphere, with many travelling fans sporting colourful national garb, including a noisy group of French fans dressed as Gallic roosters.

But Argentina were all business and came out firing in the second half as Petti marked his 50th cap by trundling over from a driving lineout to reduce the deficit.

Another driving maul allowed Julian Montoya to dive before a Benjamin Urdapilleta penalty on the hour-mark made it a two-point game.

Urdapilleta stroked another three-pointer to give Argentina the lead with 12 minutes to play, completing a remarkable turnaround.

But Camille Lopez dragged France back in front moments later with a superb drop goal that just had the legs in his first involvement after coming on.

Ntamack missed a late penalty before Boffelli hooked his long-range effort just wide to allow France to escape after an ill-tempered affair which boiled over after the final whistle as fighting broke out between the two sets of players.

"It's a shame to be refereed like a small nation," he fumed.

"But we didn't do anything in the first half, defended badly, didn't attack well -- lost every ball into contact," added Ledesma, who was left to rue fine margins.

"We created many opportunities, scored, missed two points, missed three points in the first half. It comes down to that."