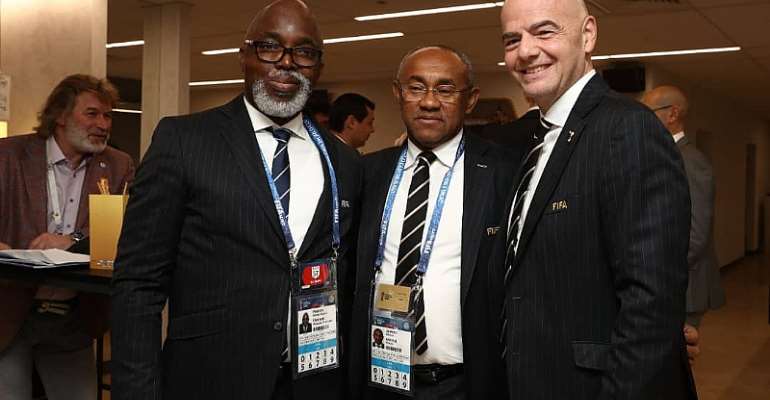 September 19 – Doubts have been raised over the integrity of the Nigerian government investigation into Nigeria Football Federation (NFF) president Amaju Pinnick that has seen property reportedly seized, including his home in Park View Estate, in the Ikoyi suburb of Lagos.

Two years ago a similar investigation was conducted into the affairs of the NFF by the Economic and Financial Crimes Commission (EFCC) and targeting Pinnick. No charges were issued.

The specifics of the Nigerian allegations against Pinnick have yet to be detailed in full. As regards property seizures, an ‘Events Centre’ in his home town of Warri was listed even though it was acquired before his election to the NFF presidency in 2014 and hence, logically, could not be deemed to be bought through the proceeds of alleged football corruption. His Park View Estate home was similarly acquired before he won presidency of the NFF – he is still living in that property which suggests it hasn’t been seized.

Pinnick was already a well-off businessman in his own right, working within Nigeria’s oil services sector. It is a role he still maintains, despite his extensive Nigerian and African football commitments.

Football in Nigeria has long been a political game. In 2014 Pinnick’s election to the NFF presidency followed a very bitter election battle against Iyke Igbokwe, Suleiman Muazu, Chris Giwa and Shehu Dikko, who is now his 2nd Vice-President.

Chris Giwa’s thirst for power at the NFF has remained unquenched, and in 2016 he and his supporters tried to occupy the NFF’s Glass House headquarters in Abuja, having won a court ruling in Nigeria that protested Pinnick’s election. They were eventually escorted by the police from the building.

This did not prevent Giwa – who appeared to have government support – from challenging the 2018 election against Pinnick, which he lost. Giwa – who still believed he was the NFF’s rightful leader – again took occupancy of the NFF’s HQ (while Pinnick was at the World Cup in Russia with the national team). This was despite Giwa serving a five-year ban from the game, imposed in February 2018, for breaches of FIFA’s ethics code.

This time FIFA stepped in, saying that Pinnick must return to full control or the country would be suspended because of government interference in the affairs of the association.

Nigeria’s past Sport Minister Solomon Dalung, acting on the court ruling, had previously ordered Pinnick and his board to comply with the court and leave the NFF and its building, but he was ultimately forced to back down.

What is the motivation for the investigation?

The question now being asked is whether the investigation into Pinnick is motivated by political ambition and how much of it can be related to provable allegations of graft and corruption.

One Confederation of Africa Football (CAF) insider has suggested that outside pressure has been received in Nigeria to have Pinnick removed, with the suspicion of the hand of CAF president Ahmad in the process.

Ahmad is known to be in touch with Pinnick’s rivals – particularly former NFF exco member Chris Green. He also engineered the removal of Pinnick as CAF’s first vice president following his own detention in June by French police, investigating CAF’s own commercial dealings and multiple allegations of corruption.

On his release by the French authorities, Ahmad took the view that Pinnick had used his detention to plot a coup and had to be removed.

And here, there is an irony – when Ahmad’s own CAF executive committee were gathering to challenge the integrity of his presidency, there were reportedly 13 members prepared to vote for his removal from the management of CAF. Pinnick, as first vice president, baulked at taking action and in doing so effectively ensured Ahmad remained in position.