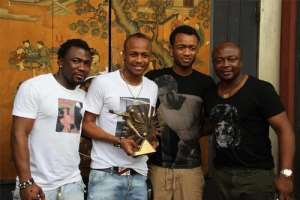 The Swansea City and Crystal Palace forward have been a key for the national team.

However, according to Rahim, he prefers doing other stuff if his brothers do not feature for the senior national team.

“If my brother and my friends are not really playing, I don’t watch, I only check the scoreline after the game. I follow their [Black Stars] games because I am a Ghanaian but it does not really bother me whether Ghana wins or not when my siblings are not in the team,” he told Sunyani based Metro FM.

The Europa FC versatile player was a member of the Black Stars team that reached the quarter-finals of the 2010 FIFA World Cup in South Africa. He has thus represented Ghana seven times without a goal.

The former Asante Kotoko man, Rahim is from a different mother, while Black Stars captain Andre and Jordan Ayew are from the same mother.

Police Hunts Eight Hooligans For Assaulting Registration Off...
2 hours ago

Until Allowances Are Paid Us, We Won't Write Our Exit Exams ...
2 hours ago