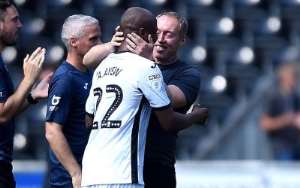 The former West Ham forward despite the juicy offers, Andre decided to stay at the Championship side.

According to the 29-year-old player, the manager had a great influence on his decision to stay at the club.

Speaking in an interview with the BBC, he admired the extra effort being invested by the manager, and that makes him feel good all the time

The FIFA U-20 World Cup winner said the manager has had a huge impact on the club based on the training regimen each day and said they were enjoying it and wanted the pace to kept at that same level.

“He (Cooper) is a tough person, he knows what he wants and he's a very good manager. People don't really know him yet but people are starting to get to know him. I believe that the award he got for the manager of the month was well deserved”, he said.

"I had to discuss with the national team coach and we spoke about it and he told me that there was no problem at all, the Championship is a very good league and that he was ok with my decision, as long as I’m fit and do what I've always done for the national team," he added.