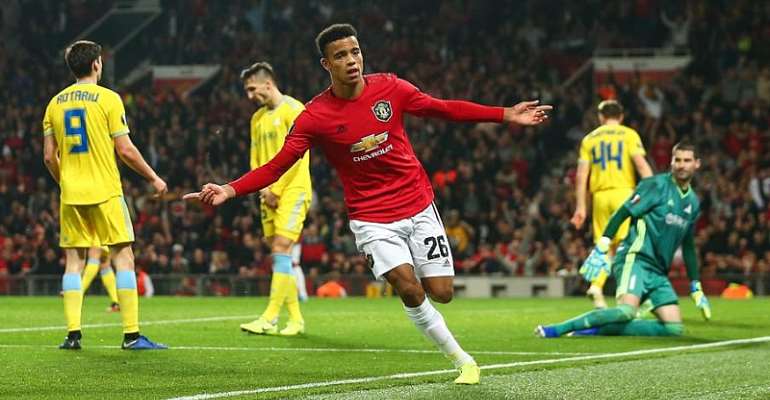 Teenager Mason Greenwood rescued a much-changed Manchester United from an embarrassing start to their Europa League campaign with the only goal to beat Kazakh champions Astana 1-0 at Old Trafford on Thursday.

At just 17, Greenwood became the youngest goalscorer for United in European competition with a composed finish under Nenad Eric 17 minutes from time.

"We always know that in and around the box he is one of the best finishers we have got," said United manager Ole Gunnar Solskjaer on Greenwood's composure.

Victory justified Solskjaer's decision to make nine changes from Saturday's Premier League win over Leicester with a host of youngsters given their chance to impress.

Greenwood was joined in the starting line-up by Angel Gomes, Axel Tuanzebe and Tahith Chong.

"Today was a great opportunity for them," added Solskjaer.

"We made it hard for ourselves. Games like these, you want to make sure you win the game in the first 20 minutes and you can enjoy it.

"You could see some of our lads needed games but it's pleasing we got the three points."

The visitors had travelled nearly 6 000 kilometres to the Theatre of Dreams and could have held out for a famous point thanks to Eric's heroics in goal.

Brazilian midfielder Fred saw an early effort come back off the bar as United started strongly and Eric made two brilliant saves to deny Marcus Rashford.

Rashford made his name in similar circumstances during an injury crisis for Louis van Gaal in the Europa League in 2016 with a double against Danish club Midtjylland.

And Solskjaer is hoping United's failure to qualify for the Champions League can at least come to some good with the Norwegian keen to promote youngsters in Europe's second tier competition this season.

Solskjaer has been glowing in his praise of Greenwood's poise in front of goal and he repaid his manager's faith by twisting and turning inside the area before slotting in at the near post to end Astana's resistence.