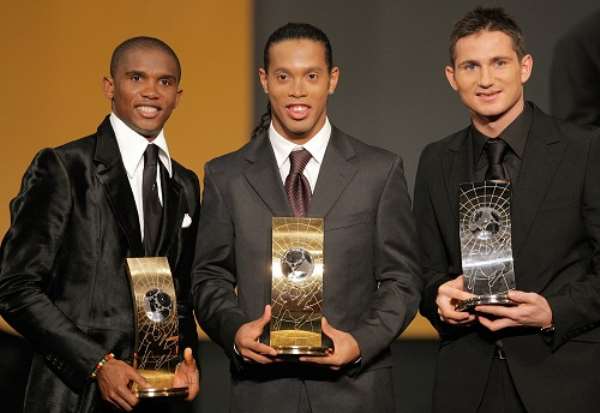 Mourinho first worked with Eto'o at Inter Milan during the 2009-2010 season where the pair won a treble securing the Serie A title, the Italian Cup and the Champions League.

The pair then teamed up at Chelsea three years later for a short spell with mixed fortunes.

"It's difficult to understand how Samuel Eto'o never won the Ballon d'Or with the impressive career he had" Mourinho said in an interview with Cameroun Radio.

"Samuel played for the best teams in the best leagues in the world. He scored an incredible amount of goals and was successful in different leagues.

"He played three Champions League finals, winning two with Barcelona and scoring in both finals. He also won one champions league at Inter and won many league titles.

"He was the best striker in the world for several years and I think he deserved a Ballon d'Or, but these are things out of our control."

Samuel Eto'o won a record four African Player of the year awards, while his best placing in now defunct FIFA's World Player of the Year award was third in 2005.

As well as winning the Nations Cup in 2000 and 2002 he went on to become the tournament's all-time leading scorer with 18 goals.

The former Everton and Chelsea forward is among a cast of African players including Didier Drogba, Michael Essien and John Obi Mikel who thrived under Jose Mourinho, but 'The Special One' believes the former Cameroun captain is unique.

"Samuel's career was very impressive and he was one of the best strikers in the world for many years," Mourinho insisted.

"He's an absolutely fantastic player, and the most important thing for a footballer is his contribution to his team for victories.

"Samuel was a great individual player but was always a team player.

"He was always giving everything he could for his team to be successful. He is a trophy winner. He won all the important competitions and he had a very phenomenal career.

"He was almost an unstoppable player, but his qualities as a man at some point became more important. He was a good colleague and he could do all for his team to win games.

"While at Inter, we played Barcelona in the champions league semi-finals, we were with 10 men and Eto'o played the entire game almost at right back. He sacrificed himself for the team and played at the position to ensure we win.

"That's what the team needed at that moment. In Milan, we had won 3-1, going to Camp Nou, we didn't need to score, we just needed to get to the final and he understood this. He did what was necessary for the team to go through to the final.

"These are great human qualities and I have no doubts Eto'o will be successful after retirement."

Samuel Eto'o who played for 13 clubs in six countries and scored an unprecedented 56 goals in 118 appearances for Cameroun has stated that he is taking a sabbatical from football to spend time with his family.