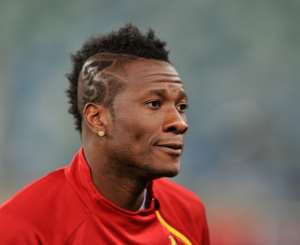 Gyan, 33, joined the Highlanders a free transfer after leaving Turkish club Kayserispor at the end of last season.

“I am extremely excited to start this new chapter in my career. I have heard great things about NorthEast United FC and the Indian Super League and I am thrilled to be a part of it for the upcoming season. I am confident that we can better the wonderful season the club had last year,” Gyan said.

Priya Runchal, the Executive Director of NorthEast United, admitted how excited he and the club is to have signed a big name in the form of Gyan.

“We are thrilled to have a player of Gyan’s calibre and experience join our squad. He has continuously delivered excellence at the highest of levels of world football and we are confident that he will add a lot of firepower on the pitch here.”

Gyan has played for Sunderland in the English Premier League and is the all-time record goalscorer for his country in international football.

The former Liberty Professionals striker has also represented Ghana in a total of 4 FIFA World Cups.

Gyan is also the player with the most number of caps for Ghana and has played in two finals of the African Cup of Nations.

He has played football. in Italy, France, England, UAE, China as well as Turkey, making over 400 appearances in total and scoring over 200 goals.