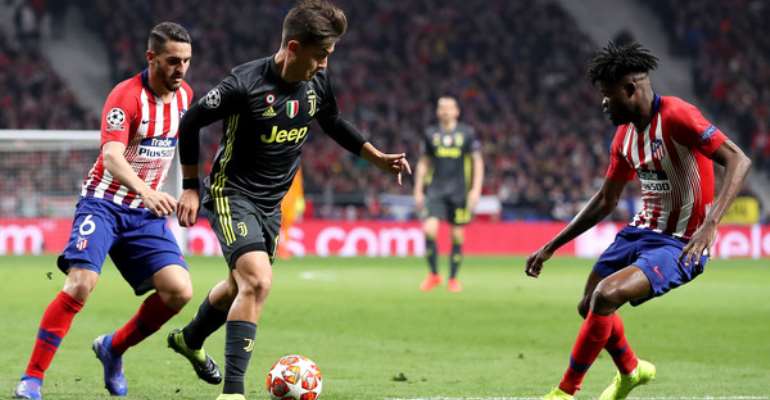 The 5 Ghanaian players in the season’s UEFA Champions League featured for a total of 186 minutes the opening day of Europe’s highest club competition.

The players- Thomas Partey, Richmond Boakye Yiadom, Joseph Paintsil, Kwadwo Asamoah, and Majeed Ashimeru- were all registered by their teams for the competition.

Partey played a total of 76 minutes for Atletico Madrid as they drew 2-2 with Juventus on Wednesday at the Wanda Metropolitano.

Partey started the game but he got injured in the second half and replaced by Hector Herrera who ended up scoring the leveler late in the game.

Kwadwo Asamoah lasted longer than Partey in his first European outing of the season as Inter Milan drew 1-1 at home with Slavia Prague on Tuesday. Asamoah saw 90 minutes for Inter Milan but got yellow carded 54th minute.

Forward Richmond Boakye Yiadom came off the bench to play 20 minutes for Red Star Belgrade in their 3-0 loss to Bayern Munich in Germany.

While Partey, Boakye Yiadom and Asamoah got a taste of the on-field action, Ashimeru and Paintsil were not so fortunate even though they could have faces each other in the same match.

Ashimeru was on the bench for Red Bull Salzburg in their 6-2 mauling of Painstil‘s Genk on Tuesday. Painstil was absent from the Belgian side due to an injury he picked up on Saturday in a league game against Charleroi.

‘Bawumia Should Compare Himself To Lilwin; Not Jane Naana’ –...
6 hours ago